Now that we are two days into the countdown of the 18 Most Important Diamond Rebels, I will put a list at the bottom of the article each day recapping the list thus far. So far we’ve had a utility man and midweek starter on the list and today we go with another pitcher: sophomore reliever Wyatt Short. 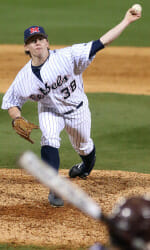 After starring for five years at Southaven High School, Short burst onto the scene last year for the Rebels as a true freshman. The 5’8, 160 Lb. reliever posted a 3-3 record along with three saves, a 2.59 ERA, and a .186 batting average against. In his 31.1 innings of work, he struck out 34 while just walking 13.

Uncharacteristic of a freshman, he saved his best performances for clutch moments. Short pitched 1.2 scoreless innings in the Super Regional against UL-Lafayette, 1.2 scoreless innings against TCU in a College World Series elimination game, and 3.1 innings of one-run ball against eventual runner-up, Virginia.

Short will be relied upon heavily as either the set-up man or the closer this year after the departures of Josh Laxer and Aaron Greenwood, whom combined for 11 of the Rebels’ 17 saves last season. Without a clear-cut closer, Short could fill a variety of roles, none less important than the next: closer, setup man, or long-relief closer.

His case for being a closer is strong as he will be largely unaffected by the new baseballs put into play this year, and his strong command of the plate means he won’t walk himself into trouble.

If he is ultimately the setup man along with occasional save opportunities, like last year, it will not be a knock on Short. It will merely mean that Ole Miss has two guys capable of slamming the door on opponents late in the game. The Rebels could form a tandem, along with Scott Weathersby, that makes it extremely difficult for the opposition to fight back in the latter part of the game.

The final spot he could play is the long-closer role. If Ole Miss has exhausted their bullpen in a long week, a tournament format or because of an extra-inning game the day before, the coaches could opt to use Short immediately after the starter. If the starter can give six or seven innings with Ole Miss ahead, Mike Bianco may give Short the ball and tell him to finish it off. That is a great weapon to have when you can only put out two pitchers in one game, both of whom you trust to get the job done.

No matter the spot he’s placed in, Short figures to be a huge key to the Rebels being successful in 2015. As the Kansas City Royals proved with their run to the 2014 World Series, an elite bullpen can take you a long way. If Short can duplicate his success from 2014, that will go a long way toward forming such a bullpen. One thing is for sure, no order is too tall for Short.