World famous specialty sandwiches, po’boys, and salads; those delicious items in the same sentence have to mean we’re talking about Oby’s. As Restaurant Week continues and people dine out to support their local restaurants and food charities; Oby’s co-owner Ayers Spencer is excited about his restaurant’s second year to participate.

“We’re offering 10 percent off the customer’s total purchase during Restaurant Week,” he said. “And then we’re encouraging people to please go online and vote for their favorite charity afterward. And it doesn’t matter whether it’s one person or 10, they’ll get 10 percent off their total check when they tell us they want to participate in Restaurant Week.”

Of all the delectable choices on Oby’s menu, Spencer said they did have their bestsellers.

“Our No. 1 selling sandwich is Oby’s shrimp Po’boy,” he said, “but we sell more catfish and chicken tenders than any other items on the menu. Of course, our alligator Po’boy is also pretty popular. It tastes just like a fried pork chop and there are quite a few customers who order it.”

David Calhoun and Ayers Spencer, co-owners of Oby’s, both grew up in Oxford and graduated from Oxford High School. They left their hometown to pursue their dreams elsewhere for a short time. 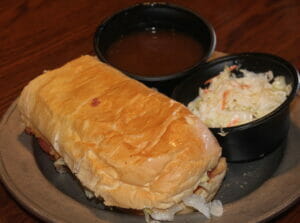 “I was in South Carolina with a different restaurant concept and had multiple units,” Spencer said, “and David was in North Carolina with his own restaurants, when we both decided that we wanted to come home to Oxford. So, we moved back and started Oby’s together.”

In July 2015, Oby’s will celebrate their 10th anniversary.

Community spirit and the coming together for a common cause keeps Oby’s coming back for more of Restaurant Week each year.

“Supporting each other in the restaurant business is important, but helping our local food charities as much as we can is vital. Restaurant Week started Sunday and we try to promote it as much as possible here at Oby’s,” he said. “We have the Restaurant Week cards in front of each register, and then up on my display screen, we have the prompt ‘ask your cashier how to get 10% off of your meal today’ to remind people about what’s going on this week. And the website to go to when voting for their favorite food charity is on the cards in front of the registers: oxfordmsrestaurantweek.com which takes you to Visit Oxford and the voting page. http://visitoxfordms.com/oxford-restaurant-week/”

Spencer said last year there were ballot boxes for all the votes, but the website is much more convenient for customers and easier when it came to counting the votes.

“I think the website is a great idea,” he said. “I’m also really excited because I received an email on Tuesday that had a leader total through Monday for the restaurants that had the most responses from people who’d went online and voted; Oby’s and Panera’s were tied for first place. We’re very happy to be a part of Restaurant Week and happy to support our local charities in any way we can.”