We will update this as the National Letters of Intent come in throughout the day and put them in order of received. There will be recaps and further coverage later in the day.

Three-star by 247, ESPN, Rivals and Scout

Woods is an electric playmaker in the back-seven that could find himself at either husky or stinger for the Rebels. Despite attending the same high school as Laremy Tunsil, he did have the same fanfare around his excitement. He has flown under-the-radar due in large part to his early commitment. Ole Miss has done well with a couple linebackers from Florida recently in Serderius Bryant and Keith Lewis, and head coach Hugh Freeze feels like he may have another one.

Three-star by 247 and ESPN, two-star by Rivals and Scout

Committed to Ole Miss on Feb. 4, 2015. He was previously committed to Pittsburgh.

Curtis’s commitment came as a surprise to all Rebel fans this morning as it appeared he was Pitt-bound last night. This is one that all Ole Miss fans should be elated about as he is a star in the making. After focusing much of his high school career on basketball, Curtis did not attend scouting camps and has been largely underlooked by all four recruiting services. He was highly productive in Florida’s top classification with elite athleticism as well. Curtis may be the steal of the class. 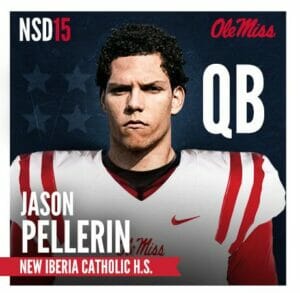 Four-star by 247 and ESPN, three-star by Rivals and Scout

Pellerin has great size, a high IQ, and tremendous athleticism. The only knock against the guy is the offense he played in during his high school years didn’t showcase his arm as much as it did his legs. That’s not a knock the Rebels care too much about as they’ve seen him throw many times and believe he could be the quarterback of the future. He is a good on-field leader, keeps everything very low-key and after a year or two on the sideline, should wow Rebel fans with his play on the field. 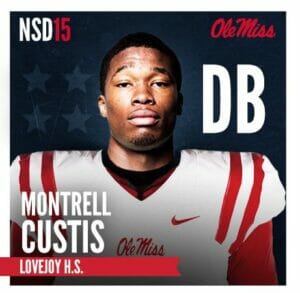 Four-star by Scout, three-star by 247, ESPN and Rivals

Committed to Ole Miss on Feb. 2, 2015. Previously committed to Alabama and before that, to Kentucky.

Custis came onto Ole Miss fans’ radars late in the process but they’re glad he’s in the boat now. He can play cornerback or safety and figures to be a big factor in the red zone with his large stature in regards to the position. Remember, Alabama doesn’t exactly covet just any defensive backs which speaks to just how good he can be. His first year may be a redshirt or special teams year due to depth in the secondary but look for him to contribute down the road.

Howard was heavily pursued by Oregon if that gives any insight into just how athletic he is and the height of his ceiling. He needs to put on some weight before he can play in the SEC which should be no problem for strength coach Paul Jackson due to his large frame. Expect a year or two putting on weight and learning the system, then he could be just the tackle Ole Miss needs in the fast-paced system they want to run. 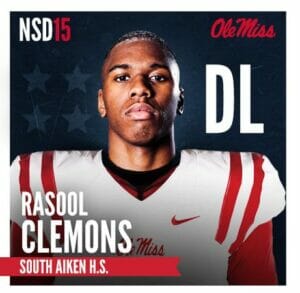 Four-star by 247, three-star by ESPN, Rivals and Scout.

Like Howard, Clemons has some weight to add before he can contribute significantly to the Rebels. He has long arms and could be a playmaker on the weak side. The former UVA commit was sought after by many top programs in the South and Ole Miss believes they’ve got a good one. 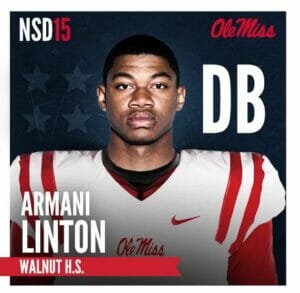 Four-star by 247 and Scout, three-star by ESPN and Rivals.

Linton went from a relatively unknown at a small Mississippi school to the No. 6 safety in the country according to 247. His tape, stats, measurables and athleticism make him an elite prospect and all that was holding him back was his level of competition. He won’t have to worry about that anymore as he will be playing with and against some of the best in the nation. The one-time Bulldog commit was chased by MSU head coach Dan Mullen until the very end but never wavered from his pledge to the Rebels. 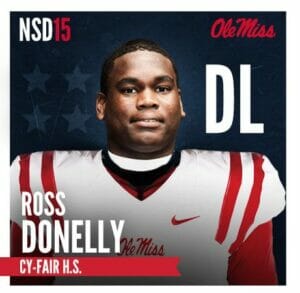 Donelly’s commitment on Monday came as a bit of a surprise to many in Rebel Nation. He was thought by many to either go to Stanford or Vanderbilt before announcing for Ole Miss on his Twitter page. The big nose tackle is highly disruptive in both the pass and run game. 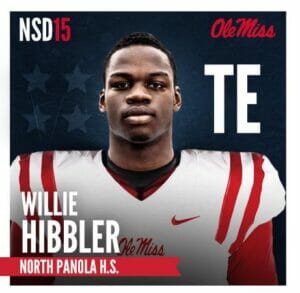 Four-star by ESPN and Scout, three-star by 247 and Rivals.

Hibbler’s been a solid commitment for a year-and-a-half, but that doesn’t mean he hasn’t been a recruit to follow. Rumors circulated in the fall about his status on the team and after one game he was involved in a serious car accident. He’s now recovered and has been working tirelessly to get himself into the best shape possible to be either a receiver or tight end in Oxford. Saying Hibbler has top-level athleticism is an understatement. 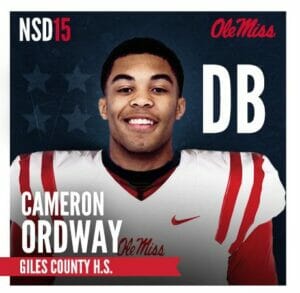 Four-star by ESPN and Scout, three-star by 247 and Rivals.

Just like Howard, Ordway is thought of very highly by the Worldwide Leader, making the ESPN 300 list of the 300 best senior prospects in the nation. He has great size for a cornerback, something the Rebels have been focusing in on lately. Ordway could remind a lot of fans of freshman Kendarius Webster with his measurements and his attacking style in the red zone. Oh, and if Pulaski, Tennessee sounds familiar, it may be because you’ve heard of a guy named Bo Wallace. 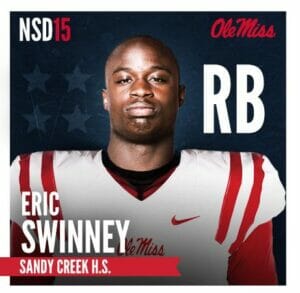 When Swinney committed, the Rebel coaches told him he would be the only running back in this class. He told the coaches that he was going to be solid throughout the process. Both sides held true to their promises. Every big school in America, even in-state Georgia, pursued Swinney heavily. He accelerates really well, bounces off would-be tacklers with ease, and should see a lot of carries during his tenure in Oxford. 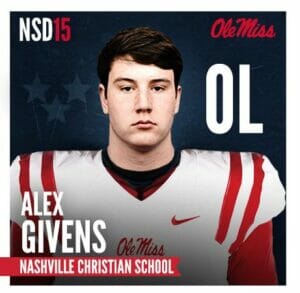 Four-star by 247, three-star by ESPN, Rivals and Scout.

Givens falls under the same umbrella as Linton: a highly-productive prospect with great size that didn’t play against much competition. Also like Linton, he has started garnering lots of national respect as of late and was bumped up to a four-star on 247 not too long ago. He has all the makings to be a left tackle in the SEC, providing the Rebels with immediate depth and a cornerstone for the future. 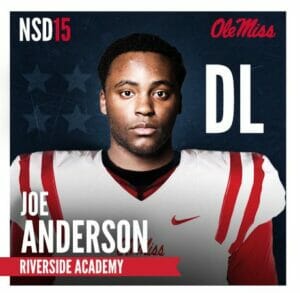 Four-star by ESPN, three-star by 247 and Scout, two-star by Rivals

Anderson has been seen as a likely sign-and-place candidate for a couple months, but is still a good signing for Ole Miss. If he progresses in junior college, the Rebels have put themselves in a good spot to sign him in 2017. 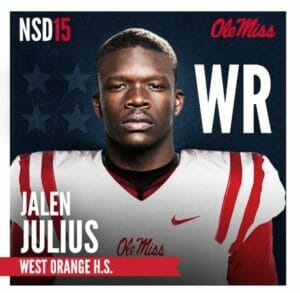 Julius gives Ole Miss options on all three sides of the ball. He is dynamic in the return game and could figure in as competition to Markell Pack as the punt returner from Day 1. Julius can also be used in the slot as a receiver as he possesses above-average hands. Where he figures to play the most is on defense at cornerback. His ball skills are very good and he positions himself well. For now, he is depth at the position but in the future he could be a star in red and blue. 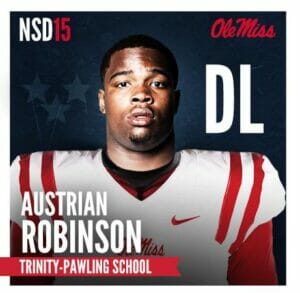 Robinson can play on either side of the line, offering Ole Miss some versatility in fall camp. Most have him pegged as a defensive tackle but if any position on the lines starts to look thin, Robinson can slide right in and get some snaps. It’s not often that Ole Miss goes to the Empire State to get a player, but they got a good one. 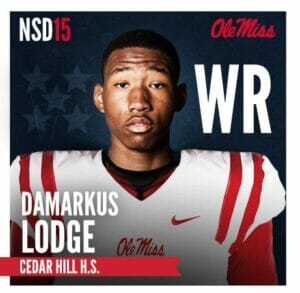 Five-star by Scout, four-star by 247, ESPN and Rivals.

The Rebels hauled in a huge deep threat with Lodge. He was coveted by every program in the country and the Rebels had to work hard to hold off in-state Texas and Texas A&M for the All-American. Unlike a lot of freshmen, there will be no  redshirt consideration for the Texas player. He’s going to contribute in a hurry, and he figures to be a huge asset for whomever the new Rebel quarterback will be. 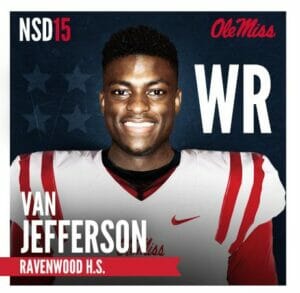 In a week filled with drama, Jefferson added to the high blood pressure felt by Rebel fans. He delayed his announcement numerous times and national pundits pegged him as deliberating over Georgia, Michigan or Ole Miss. No matter what the facts are, only one remains: he signed with the Rebels. Jefferson will immediately step in to playing time in the slot and as the son of an NFL receivers coach, is as polish as one could ask for at 18. Ole Miss fans are relieved at the moment but that relief will fade into jubilation once he steps on the field and starts making plays at Vaught.