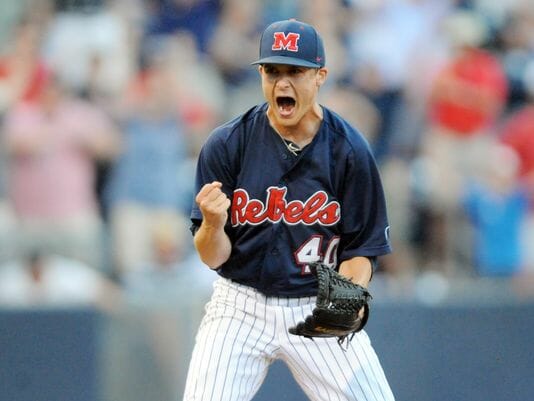 Last season, the Rebels were equipped with one of the nation’s best bullpens. They didn’t just have one closer that could shut the door in the ninth, but two, Aaron Greenwood and Josh Laxer. Unfortunately for Ole Miss, neither Greenwood or Laxer will be suiting up in Oxford this year. Luckily they return the vast majority of the pen, including senior Scott Weathersby.

The Hattiesburg native was electric for the Rebels last year, going 4-1 with two saves and a 2.13 ERA. He was a workhorse for head coach Mike Bianco, completing 38.0 innings of work, second-most on the team for relievers behind Greenwood. In that time he had an astonishing 51 strikeouts to just 10 walks, holding runners to a .207 batting average.

Weathersby is as reliable as they come out of the pen and will be one of the pitchers least affected by the new baseballs. He can come in for a one or two-inning save with powerful stuff that can get hitters to either whiff or beat it into the ground. While it can be an adjustment to go from a setup man to “the guy,” his experience closing and working in big spots should ease the transition.

Luckily for Weathersby, he will not have to be the everyday closer as Wyatt Short will have duties against lefty-heavy spots in the order and to give Weathersby a day off. The two should make a formidable tandem at the back-end and gives the Rebels the punch they need to squash any late rallies.