On Cooking Southern: Celebrate February with Soul and Spirit 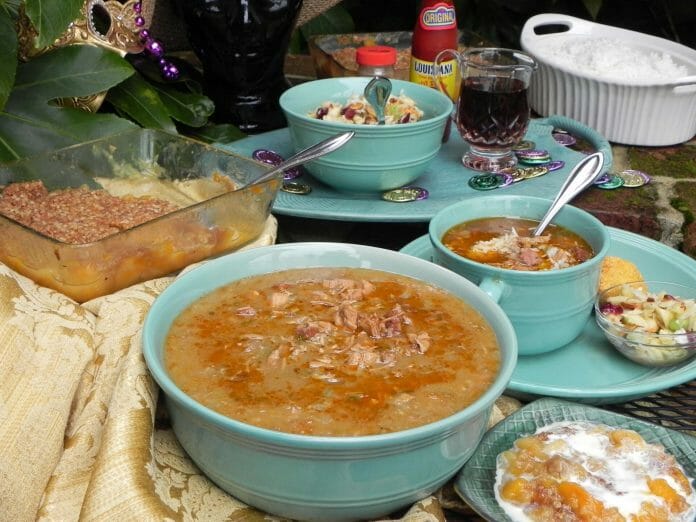 Slow as molasses: Abbreviation of the expression “as slow as molasses going uphill in January”… harks back to a January 1840 Louisiana Supreme Court decision involving a leaky molasses cistern that burst… between that time and 1872 the expression caught on in American vernacular, claimed by Yankees after a series of molasses mishaps culminating in the Great Boston Molasses Flood of 1919. Southerners recaptured the idiom in 1939’s Gone with the Wind, and the rest, as they say, is history.

February is always The Old Bride’s most difficult month, food-wise.

It’s not because Mother Nature has sent the cold weather to remind us about the circle of life and death, or how good She can be when Summer rolls around. It’s because we have too many events and commemorative occasions to celebrate through food in February.

It’s also when the crawfish start showing up around town.

There’s not enough time to cover everything. That’s why this week’s column is dedicated to a meal of comfort food recipes reflecting our Southern everyday cuisine. Folks not from around here call this cuisine Soul Food. Around here, we call it home cooking.

The recipes represent a typical meal consumed regularly by my extended Delta family in Louisiana, Arkansas, Mississippi and Memphis. These dishes are deeply rooted in the region’s Black History and a come-together spirit traditionally represented by Mardi Gras, church homecoming potlucks, and regional festivals such as the former Cotton Carnival and Cottonmakers Jubilee.

Like other dishes in our culinary arsenal, “Soul Food” dishes such as greens and beans and peas and fried chicken and mac’n cheese reflect an amalgamation of different cultures’ cuisines, both indigenous to the Americas and brought here by Europeans, Asians, and Africans making do with local food sources.

Often interpreted and prepared for the ruling classes until recent decades by Black cooks, those dishes spilled over into the working class white community and absorbed flavors brought to the community by Italian, Greek, Middle Eastern and Asian immigrants.

Consider, for instance, gumbo. Origin? Africa… The key ingredient for which gumbo is named? Okra. Its origin? Africa…. What about corn meal, a staple in every Southern household for two hundred years? Native American, interpreted as corn bread and hoecakes by black cooks and white settlers lacking fancy ingredients…

What about peaches, which have become synonymous with the best of Southern cuisine? They’re a 19th century phenomenon started by Thomas Jefferson in the 18th century, by way of France, via Spain, via the Middle East and China. Peach crisp, peach crumble, peach pie and peach cobbler were dessert interpretations by Americans of all ethnicities.

What about the rice for the gumbo, or the cane syrup or sorghum for the hot water cornbread?

Asian rice came to Mexico with the Spaniards, African rice to Brazil with the Portuguese and their slaves, and to South Carolina in 1694, possibly from Madagascar.

Sugar cane, the source of cane syrup, originated in the tropics of South and Southeastern Asia, and its production came to the Americas with the Andalusian and Portuguese conquistadors from the Madeira Islands. A member of the grass family whose seed plant family includes rice, wheat and sorghum, sugar cane migrated to the Gulf Coast from the Caribbean.

Sweet sorghum from Africa was deliberately introduced in this country in 1853 by a U.S. patent officer as a less expensive alternative to slave-dependent cane sugar. Sorghum quickly became a common substitute for crystallized sugar, cane syrup, and the cane sugar byproduct, molasses. Sorghum contains vital nutrients and is still widely grown in Alabama, Georgia, Kentucky, Mississippi, North Carolina and Tennessee.

For a titillating peek at delicious recipes emblematic of Southern Soul, check out the February issue of Southern Living Magazine, which heavily features “The Next Generation of Soul Food” by Caroline Randall Williams, award-winning poet and novelist currently working on her M.F.A. degree at Ole Miss. Her first cookbook, co-authored with her mother, Alice Randall, and published last week, is now available at Off Square Books.

And check out web sites dedicated to the history and preservation of recipes considered Soul Food, such as Soul Food Advisor.

There are numerous variations on this recipe. I omit the bell pepper but add lots of okra. This gumbo freezes well. RE: the ROUX: Cooks unable to master the Art of the Roux can now BUY pre-made Roux. Once opened, a jar lasts in the fridge for months! This version of gumbo doesn’t need gumbo file powder for thickening, although some diners like it sprinkled on top of the individual serving. 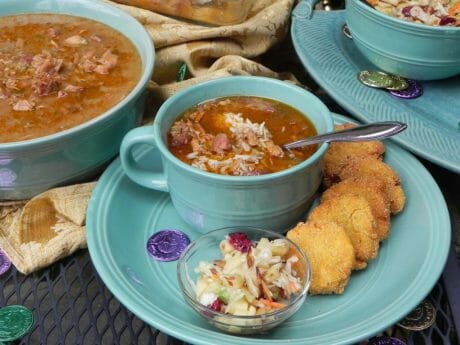 Boil chicken breasts in 3 qt water with thyme or poultry seasoning, cloves of garlic, salt and pepper for about an hour.

While chicken is cooking, remove skin from the sausage and cut into small cubes. Set aside. Remove chicken from simmering stock when it begins to fall apart.

Melt 1 stick of butter or 1/4 to 1/2 c olive oil in a large stock pot or Dutch oven. Add onion and celery; cook until transparent. Stir in the cubed sausage and cover about 5 minutes. Remove lid and stir in 2-6 heaping tablespoons of roux. Add a small bit of chicken stock to dissolve the roux into the mixture. Simmer about 10 minutes and stir into the Gradually whisk in remaining chicken stock, including bits of cooked garlic from the stock. Simmer 15 minutes.

Pour pot of roux, chicken and veggies into the simmering stock. Stir, Add okra. Stir in Creole seasoning. Simmer about 15-30 minutes, stirring frequently. Add hot sauce, salt and pepper to taste. If gumbo needs thickening (which it shouldn’t because of the roux and okra), add 1 tsp gumbo file at the end. Serve in deep bowl over white rice. Works well with corn bread or muffins or French bread and salad. NOTE: The gumbo will thicken the longer it sits.

I don’t like the fancy-schmancy hot water cornbread containing sugar and eggs. They interfere in my opinion with the sweet-and-crunchy-and-salty combo of syrup and hot bread. On the other hand, adding sugar to the Mexican Fiesta variation is a different story! 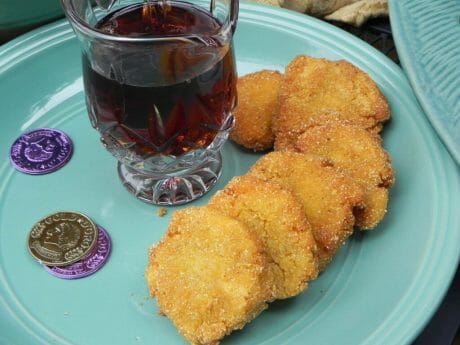 Stir boiling water into the cornmeal mixture in a bowl that can withstand heat. Add the bacon. Heat 1/4-inch depth of oil in a large skillet on medium-high heat. When oil is hot but not smoking, drop batter from spoon into the oil and lightly press with back of spoon to flatten into patties. Cook until browned on bottom. Flip and cook until second side is browned. Remove to paper towel-lined rack to drain. Serve while still hot, drizzled with syrup of choice. 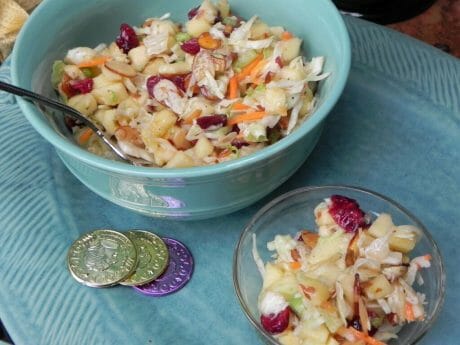 Combine first 6 ingredients in a small reactive bowl. Whisk to emulsify into a syrup-thick dressing. Toss together the slaw mixture, apples, craisins and green onions. Add the dressing and toss to blend. Fold in the toasted almonds.

It’s mid-winter. One would hope everyone’s freezer is full of pint- and quart-size baggies of fresh peaches put up last July. If not, fresh-frozen are available at the grocery store, and canned peaches will also work. If using the canned peaches, drain them before tossing with the other filling ingredients. 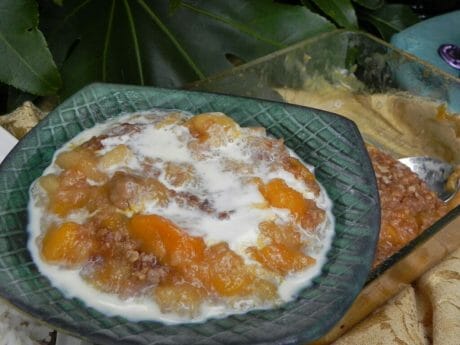 Preheat oven to 350˚F. Butter bottom of an 8-by-8-inch baking dish or two 1.5 Qt baking dishes. Whisk together the flour, sugar, cinnamon and salt in a medium bowl. Work in the cold butter until mixture is crumbly, using a pastry blender or two forks. Fold the oats into the mixture.

Combine the second sugar, salt and cornstarch in a bowl. Add the peaches, lemon juice and vanilla. Toss gently to coat completely. If combination is too soupy, add more peaches and more cornstarch.

Bake in preheated oven until topping is browned and mixture is bubbling, about 45 minutes to 1 hour. Remove from oven and allow to set up for about 15 minutes before serving (still) hot, topped with vanilla ice cream.