Blood In My Eye Premieres at Overby Center

A documentary featuring an emerging strain of anger among some prominent African-American activists and intellectuals during the civil rights movement will have its public premiere at the Overby Center for Southern Journalism and Politics next Tuesday, February 17, at 4:30 p.m.

Mykki Newton, video editor for the Meek School of Journalism and New Media, worked with Louis Bourgeois of Vox Press of Oxford to produce Blood In My Eye.

The documentary will have scenes from the Civil Rights movement in the 1960s with burning words of Eldgridge Cleaver, the Black Panther leader who wrote Soul On Ice along with black writers such as novelist James Baldwin, author of The Fire Next Time. 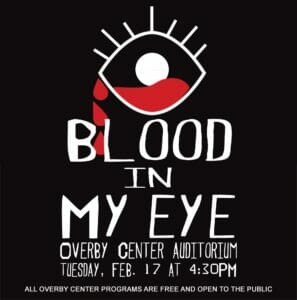 Overby Fellow Curtis Wilkie said, “Their defiance represented a radical departure from the milder form of protest that we see portrayed by Dr. Martin Luther King Jr. in the movie Selma. Books by prominent figures like Baldwin and Cleaver and others became required reading – not only for black people, but for whites caught up in the social upheaval of the 1960s.”

Blood In My Eye should provide a new dimension for observances of Black History Month on the university campus, he said.

Following the hour-long documentary, the producers will be joined by Ethel Young-Minor, an associate professor of English and African-American Studies, in a discussion of their work and the words of their subjects.

The program will be held in the Overby Center Auditorium. It is free and open to the public.