The Overby Center on the Ole Miss campus has played host to a wide array of events in its short existence. There have been graduations, documentaries, panel discussions and even a presidential debate. This spring is no different as the venue is hosting numerous marquee events, including: 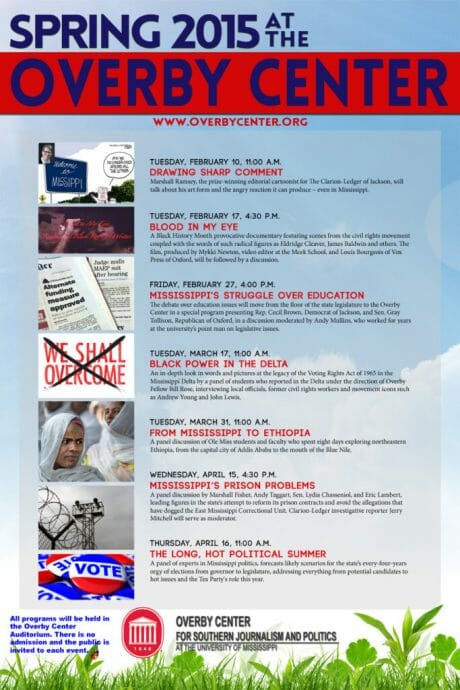 Feb. 10 at 11 a.m. – “Drawing Sharp Comment,” featuring Marshall Ramsey, the prize-winning editorial cartoonist for the Clarion-Ledger in Jackson. Ramsey will talk about the power of his art form and how it can trigger angry outbursts from normally calm newspaper readers. He will come armed with some of his more controversial cartoons.

Feb. 17 at 4:30 p.m. – “Blood in My Eye,” a provocative documentary for Black History Month that couples scenes from the civil rights movement with the words of such radical figures as Eldridge Cleaver and James Baldwin. The film, produced by Mykki Newton, video editor of the Meek School of Journalism and New Media, and Louis Bourgeois of Vox Press of Oxford, will be followed by a discussion.

Feb. 27 at 4 p.m. – “Mississippi’s Struggle Over Education,” a debate over education issues between Rep. Cecil Brown, Democrat of Jackson, and Sen. Gray Tollison, Republican of Oxford. Andy Mullins, who worked for years as the university’s point man on legislative issues, will moderate the discussion, which is expected to touch on major issues ranging from a dispute over Common Core to the growing charter school movement to a voter initiative that attempts to force the Legislature to better fund public schools.

March 17 at 11 a.m. – “Black Power in The Delta” features an in-depth look in words and pictures at the legacy of the Voting Rights Act of 1965 in the Mississippi Delta. It will be presented by a panel of students who spent their spring break reporting in the Delta under the direction of Overby Fellow Bill Rose, interviewing local officials, former civil rights workers and movement legends such as Andrew Young and John Lewis. Their findings are being published in a magazine due out in February.

March 31 at 11 a.m. – “From Mississippi to Ethiopia” is a panel discussion featuring Ole Miss students and faculty who traveled to Ethiopia with Director of Student Media Pat Thompson to write stories and essays, and shoot photographs and video.  They spent eight days during the winter intersession exploring northeastern Ethiopia, from the capital city of Addis Ababa to the mouth of the Blue Nile. They will talk about what they learned and about surprising links between Mississippi and one of America’s closest allies in Africa.

April 15 at 4:30 p.m. – “Mississippi’s Prison Problems” features a panel discussion by leading figures in the state’s attempt to reform its prison contracts and avoid the sort of allegations that have dogged the East Mississippi Correctional Unit, now the defendant in a federal lawsuit. Newly appointed Corrections Commissioner Marshall Fisher, a veteran lawman with a mandate to clean up prison crime, Jackson attorney Andy Taggart of the governor’s task force, Senator Lydia Chasseniol of the Senate Corrections Committee, and Eric Lambert,  chairman of Legal Studies at Ole Miss, will toss around possible solutions. Clarion-Ledger investigative reporter Jerry Mitchell, who has penned a series on prisons, will serve as moderator.

The Overby Center is an extension of Farley Hall on the Grove Loop. Admission to the events is free and open to the public.