Education Issues to be Debated at Overby Center Friday

Two of the leading figures on competing sides of the legislative fight over educational standards and funding will bring their argument to the Overby Center for Southern Journalism and Politics at Ole Miss on Friday, Feb. 27, at 4 p.m. 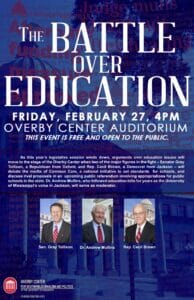 In one of the center’s featured programs for the spring semester, Sen. Gray Tollison, a Republican from Oxford, and Rep. Cecil Brown, a Jackson Democrat, will debate the merits of Common Core, a national initiative to establish standards for schools, and discuss competing initiatives in a public referendum scheduled for later this year that deal with funding for public schools in the state.

Dr. Andrew Mullins, who has followed education issues in the legislature for more than 30 years and served as the voice for the University of Mississippi’s interests in Jackson, will moderate the program.

“We’re thankful for the willingness of these two authorities on education to come to our campus for a discussion that I expect will be both spirited and informative,” said Overby Fellow Curtis Wilkie.

Tollison has served in the state Senate since 1996, and as chairman of the senate’s education committee has become the Republican Party’s leading spokesman on issues affecting schools and colleges in Mississippi.

Brown was elected to the state House of Representatives in 1999 and has become one of the Democratic Party’s most respected advocates on a variety of issues, including education.

The event, which is free and open to the public, will be held at the Overby Center Auditorium.