Eat Drink Mississippi: A Taste of France in Oxford 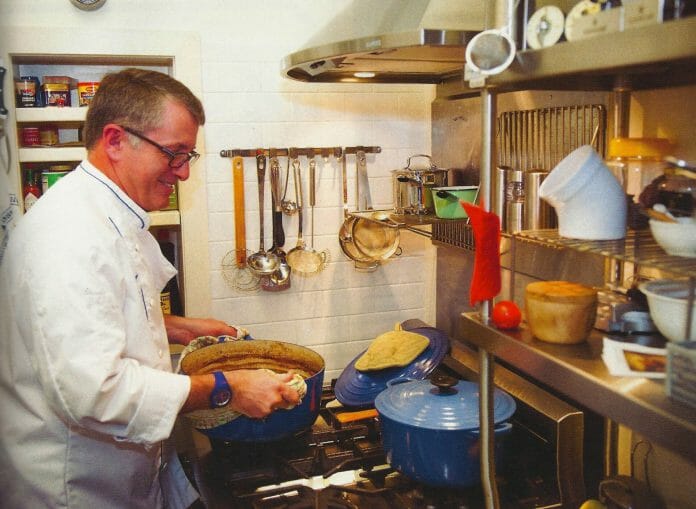 When Jay Hughes wants to go to Paris, he simply goes downstairs to the basement of his home off the Square in Oxford.

“There’s no TSA or late flights to deal with,” he laughs. “I simply pour a glass of wine, put some Edith Piaf on the stereo and escape the cares of the day!”

Hughes and his wife, Cris, love all things French. “Early in our marriage, we could get flights to France from Memphis for $299,” says Hughes. “It was an affordable vacation option for us, and we quickly grew to love traveling to France.”

Jay Hughes grew up in South Louisiana, around Houma. “My Uncle Leroy Laparous was a phenomenal Cajun cook. He worked on a shrimp boat as a cook for many years, and throughout my childhood, I experienced men doing ‘big pot’ cooking – things like gumbo and jambalaya. I learned to cook from my ‘Uncle Lap.'”

While in high school Hughes worked in restaurants in his home town before going to college at LSU, where he worked at the Magnolia Cafe in Baton Rouge. After attending law school at Ole Miss, Hughes opened The Steamroom Grill in Jackson with a few other business partners. All the while, he and Cris still traveled to France, often taking classes at Le Cordon Bleu. “Having grown up in South Louisiana, being in France and hearing the French language spoken all around me was like being wrapped in a comfortable blanket.”

Hughes’ father died in 2006, and Hughes decided to take some time off to regroup. “I went to Paris and took an intensive course at Le Cordon Bleu. I really thought I wanted to open a French bistro in Oxford.” Cris helped change his mind. “She reminded me that I was good at lawyering, and while I loved to cook French food, the best part of the meal was when itw as over and everyone was beaming. She was right in that owning a restaurant means having to deal with food and liquor costs, employees, etc.”

So Hughes did the next best thing. He built a French bistro in his basement. “We have a large basement with ten foot ceilings,” he explains. “We found all the components of an old French bistro in Northern France, including the bar, back bar, tables, chairs, and glasses. So we designed and replicated a French bistro in our home!” 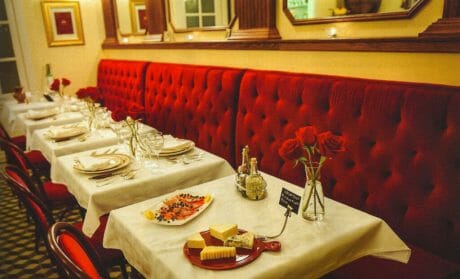 One of Jay and Cris’ favorite bistros is a little place near the flea market in Paris that is known for gypsy music. “The late Django Reinhardt played there, and many musicians play there now just to say they played where he played.” One of the things they love about the bistro is the floor. “It’s a tiled floor that gives the illusion of being multi-dimensional. We asked about it, and it had been made at the turn of the century in Morocco.” So Hughes went to work and found a tile-broker and had the exact floor recreated for his persona bistro in Oxford. “It’s amazing. We never get tired of looking at it!”

Another interesting element in the bistro are clocks that once told time at the Gare de Lyon, a train station in Paris named after the city of Lyon, known as the culinary capital of the world. “The clocks no longer work, but we have them set at 8:25, as no self-respecting Parisian leaves for dinner before 8:30!”

The Hugheses entertain friends and family in their bistro. “We’ve had several of our daughter’s birthday parties here,” Hughes says. “So much of life revolves around food. It’s the glue that holds together the great conversation and memorable moments in our lives.”

One of the things the Hughes love to do in their bistro is host charity dinners. “We’ve hosted several, some with celebrity chefs who come and cook six-course meals. Our favorite is ‘An Evening in Paris’ where we serve six to eight people.”

On January 9, a fundraising dinner for Doors of Hope was held in the bistro. “We’ll donate the food and wine, and set it up in all its grandeur,” Hughes says, “complete with red roses and champagne on each table.”