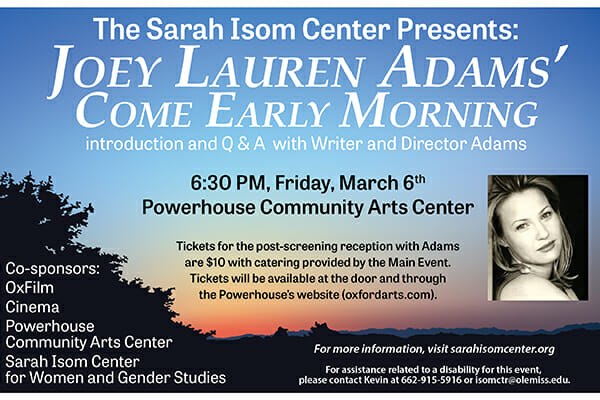 The University of Mississippi’s Sarah Isom Center for Women and Gender Studies is teaming with the Department of Theatre Arts and Oxford’s Powerhouse Community Arts Center for a screening Friday, March 6, of “Come Early Morning,” a film from former Oxonian Joey Lauren Adams. 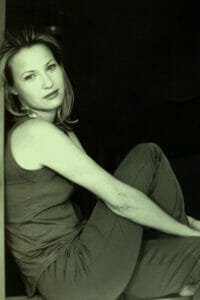 Adams, an actor, writer and director known for her roles in more than 30 films, including “Chasing Amy,” “Big Daddy” and “The Break Up,” will introduce the film and participate in a Q&A session with the audience.

The event is part of the Sarah Isom Center’s Women in the Film Industry series. The screening, beginning at 6:30 p.m. at the Powerhouse, is free and open to the public. Tickets for a post-show reception with Adams are $10 at the door. The reception ticket price includes food and a beverage.

“The Sarah Isom Center for Women and Gender Studies is honored that Joey Lauren Adams accepted our invitation to come screen her directorial debut, ‘Come Early Morning,’” said Theresa Starkey, assistant director and UM instructor of gender studies. “She is an inspiration to budding filmmakers and women who want to make a way for themselves in a tough industry. She is someone who continues to work both in front and behind the camera, and her generosity provides our students with an amazing opportunity to see an example of her work and speak with such a talented artist about her experience in the business.”

This is a rare and wonderful opportunity for students, said Alan Arrivée, director of the UM cinema program.

“Joey Lauren Adams’ willingness to share her film ‘Come Early Morning’ with University of Mississippi students and the Oxford community is very much appreciated by those of us who would like to see the university here and Oxford in general grow as a film community,” he said. “Particularly in the case of students, this is a rare opportunity to learn from someone who has successful experience in both the commercial and independent film worlds.”

“Come Early Morning” (2006) stars Ashley Judd and was selected to play in the Sundance Film Festival, where Adams was awarded the Dorothy Arzner Women in Film Director’s Award. Recently, Adams formed Argenta Productions with partner Kerri Elder and completed their first film, “All the Birds Have Flown South,” in February.