Ole Miss took the court Saturday night in the C.M. Tad Smith Coliseum for the last time against a Southeastern Conference foe, and Rebel nation filled the Tad Pad to the tip top for one more night of fun in the longstanding arena.

The 8,000-plus coliseum was opened Feb. 21, 1966, after two years of construction to primarily house the men’s and women’s basketball teams. Originally named Rebel Coliseum, it was changed in 1972 to honor C.M. “Tad” Smith, former three-sport letterman, coach and athletic director at Ole Miss. 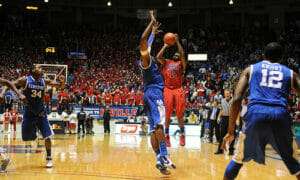 During the year I was opinion editor for The Daily Mississippian, some of the staff would often take a break and walk down the hill from Bishop Hall to take in a game. The night of that fateful game against the Wildcats in 2011, a winter storm had taken over the town and many of the faithful Rebels stayed safely home — but I didn’t.

I carefully navigated the icy sidewalks to the Tad Pad to find a surprisingly full student section and free “Rebelution” t-shirts awaiting me. As a big basketball fan since childhood, I knew even a home matchup with Kentucky is an uphill battle and the Rebels needed any support we could give.

We screamed. We chanted. We Hotty Toddyed with every bit of gusto we could muster. Though down by one heading into the half, the team hadn’t given in and the energetic crowd wasn’t going to let them.

Back for the second half, guard Chris Warren raked in 22 points for the night and drove a dagger through the heart of Big Blue Nation with a last-second 3-pointer to clinch Ole Miss’ 71-69 victory.

I still remember jumping up and down from the moment the game tipped. I still have the souvenir cup with Warren’s face on it from the game. I still wear the t-shirt. It’s a story I’ll undoubtedly tell for decades to come, and it all happened in the Tad Pad.

Though the Rebels dropped their final regular season matchup against the Vanderbilt Commodores, the atmosphere was one of the most vibrant of the season. New memories will be made beginning next season across campus at the Pavilion, but generations of Rebels will always remember the records set and goals achieved in Tad Smith Coliseum.