The Thacker Mountain Radio Hour will present a special pop-up version of the show Thursday, March 12 at 7:30 p.m. at the Lamar Lounge in Oxford. Admission is free and the show will be recorded for later air on Mississippi Public Broadcasting. Guests will include Oxford author Jack Pendarvis, blues/rock musician Jimbo Mathus and Nashville songwriter, Lilly Hiatt. The show will be hosted by Jim Dees and Thacker house band, the Yalobushwhackers. The Lamar Lounge is located at 1309 N Lamar Blvd in Oxford. Dinner and drinks service will be available during the show.

“We’ve never done a pop up like this,” says Thacker producer, Kathryn McGaw York. “We thought spring break week would be a good time since we didn’t have a regular show scheduled at Off Square Books. We hope folks who don’t normally get to attend the show can join us at 7:30 Thursday.”

Jack Pendarvis is author of the story collections, Your Body is Changing (2007) and The Mysterious Secret of the Valuable Treasure (2005) and the novel, Awesome (2008). In 2012 he joined the writing team for Adventure Time, an animated series on the Cartoon Network. He has also served as co-writer on the short films, Fun World (2012) and The Pipe (2007) which is based on one of his short stories. He is a former columnist for The Oxford American and The Believer. Pendarvis lives in Oxford.

Jimbo Mathus’ latest CD Blue Healer, will be released on April 21 on the Fat Possum label. Mathus is an Oxford native who grew up in Corinth and is perhaps best known as one of the founders of the Squirrel Nut Zippers, a hot jazz/swing band who toured extensively in the early 1990s. His previous CDs include Dark Night of the Soul, White Buffalo, Confederate Buddha and a six-song EP, Blue Light, all on Fat Possum Records. His song, “Highway at Night” was recently featured on the Season 3 finale of the Netflix series, House of Cards. Mathus lives in Taylor. 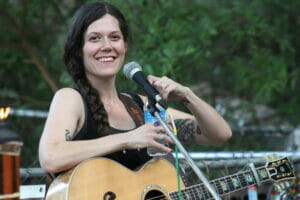 Lilly Hiatt is a singer/songwriter based in East Nashville. Her new CD, Royal Blue (Normaltown Records) was released this month and features touches of folk-rock, indie twang, and punk. Her previous CD was Let Down (2012). Her touring band, the Dropped Ponies, includes Beth Finney on lead guitar, Jake Bradley on bass, Luke Schneider on pedal steel guitar and Jon Radford on drums. Hiatt is the daughter of veteran Americana songwriter, John Hiatt.

The show will return to Off Square Books next week.

The Thacker Mountain Radio Hour can be heard every Saturday at 7 p.m. on Mississippi Public Broadcasting, 90.3 FM in Oxford and online. More information on upcoming shows is available at the show’s website, http://thackermountain.com/. Photos from past shows can be found on the show’s Facebook page and podcasts can be heard on the show’s Soundcloud page.