After six years of serving delicious daiquiris and its famous New York-style pizza, Funky’s is still one of the most popular places on the Square. Owner Lee Harris has watched Funky’s grow since opening in 2009 and could not be more proud of the bar’s success.

Harris graduated from the University of Mississippi with a degree in criminal justice and plans to be in the FBI someday, but his summers in Florida were where he discovered his true passion. During his college years, Harris spent several summers in Sandestin where he worked as a waiter at Acme Oyster House. His time in the restaurant business gave him the set of values he still holds dear today.

One of the most valuable pieces of advice that Harris received while waiting tables was from celebrity chef Emeril Lagasse.

“He asked what I did, and I told him that I wanted to open a bar one day,” Harris said. “He left me $100 tip and he left me a tip on a napkin that said ‘Keep it simple.'” Harris has treasured those words ever since and applied them to his own business strategy.

When he wasn’t working as a waiter, Harris would hang out at the Fat Tuesday across the street where they serve “New Orleans Original Daiquiris.” Harris doesn’t like the flavor of most alcoholic beverages, but daiquiris have been his drink of choice since his first summer in Florida.

“I came back to Oxford in search of that, and it was never here,” Harris said.

Though, if daiquiris aren’t your style, Funky’s still has one of the largest selections of alcohol in Oxford.

The frozen daiquiris paired with the New York-style pizza created the perfect menu for his bar. After Harris learned that L’Amore Pizzeria on Jackson Avenue was closing, he swooped in to buy the recipe for its famous pizza from the owner and his friend, David Campanella. Harris has loved the pizza from L’Amore ever since his first bite. 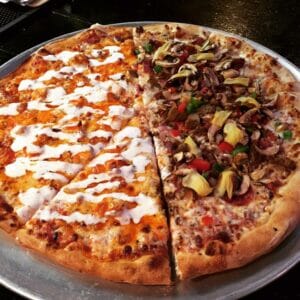 “I remember the first time I ever came in L’Amore, I was sitting in the back booth with (Campanella) and he wanted me to try it,” Harris said. “I tasted it and I said ‘Man, that is the best pizza I have ever had in my life.'”

Inspired by The Funky Blues Shack, Fat Tuesday and Acme Oyster House, Harris decided on a New Orleans-themed bar for his home in Oxford. Although he doesn’t like hanging out at the crowded bars in NOLA, he enjoys their cluttered walls and vibrant atmosphere. Chris Heaton and Chris McCaslin searched many junk-tique stores until he found the perfect assortment of junk for the eclectic walls. The open windows and doors also give it a very New Orleans feel.

Now that Harris has discovered the joy of owning his own bar, he said he doesn’t ever see himself quitting.

“I like it because I come to work every morning, but it’s really not work,” said Harris. “I hope this goes on for many, many years because I’d like to have a couple more.”