One of the South’s rising culinary stars is Chef Kelly English. 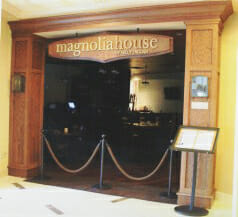 He was Food and Wine Magazine’s Best New Chef in 2009, and is the executive chef and owner of two of Memphis’ favorite restaurants, Iris and The Second Line. In May he opened Magnolia House in Harrah’s Gulf Coast Casino, Biloxi and the food world is all a-buzz about what he is doing there.

Chef English is a Louisiana native, a University of Mississippi grad, and graduated at the top of his class at prestigious Culinary Institute of America. He worked for Chef John Besh in New Orleans before deciding on a move to Memphis, where recognition for his talented approach to Southern food continues to receive accolades.

All the awards in the world mean nothing at all if the restaurant you’re sitting in doesn’t perform as advertised, but Magnolia House is on solid ground. The menu is seasonal, so expect big changes, but that should be a matter of great anticipation, not despair. The current menu is a one pager, but again that should be a point of confidence. A tight menu brims with confidence. 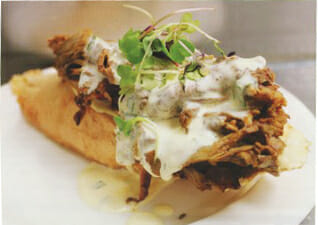 The small plate list is only eight strong, but a grand meal could easily be made from this seafood-heavy opportunity. The one exception, and it is one of the best items on the list, is Miss Stella’s open face roast beef po-boy. Don’t you dare leave this house without trying it. Another outstanding and delightful choice is the pimento and cheese stuffed Gulf shrimp with comeback sauce. To elevate this plebeian Southern favorite to such august height is a very cool touch.

The seafood selection is a slim list of six choices, but what a great list it is. Mississippi Delta catfish never had it so good! Chef English uses a traditional corn base to fry these filets, and follows on with brown butter pecans and brabant potatoes (a recipe that calls for the potatoes to be simmered in water, drained and fried quickly in hot oil). Other choices that are enticing are the Gulf crab carbonara, another grand idea, and classic shrimp and grits.

The land-food offering is surprisingly diverse and isn’t overly concerned with beef, although the Restaurant Iris short rib ravioli served with a demi-glace seems almost too good to be true! The chicken with red beans and rice cassoulet is also a nice touch, and if you are serious about your beef, the wagyu burger should top your list.

This is a comfortable place to dine, sophisticated, but welcoming. Chef English goes out of his way to be farm to table, as well as Gulf to table. The menu is solid, the wine list does its job, and you will leave this place as content as you can. A special note should be made about service at Magnolia House; it just could not get higher marks.

Story and photography by Julian Brunt for Eat Drink Mississippi