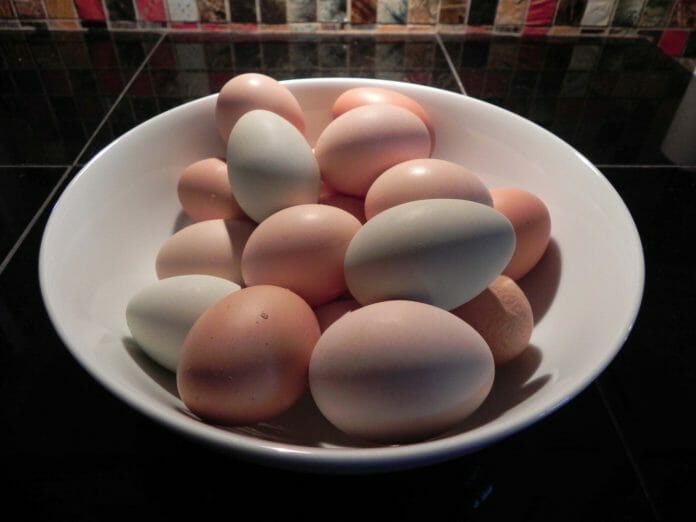 SOUTHERNISM OF THE WEEK
Be sweet: A sexist admonition to curb one’s attitude and what’s coming out of one’s mouth. Usually said sternly to female Southerners of any age, meaning “dial back the estrogen” and “pull in the claws.” The male equivalent is “tone down the testosterone” or “dial it back.”

EGGSTRA EGGSTRA! TIME TO CRACK A HARDBOILED CASE OR TWO

Hallelujah! Spring is here. Only a few weeks after the deep freeze, the signs are unmistakable. Birds are singing their little throats out from first light to dusk. Daffodils and flowering trees dot the landscape with cheery splashes of yellow, white and pale pink. Daylight now sticks around past the evening news, and remnants of crape murder litter streets all around town. 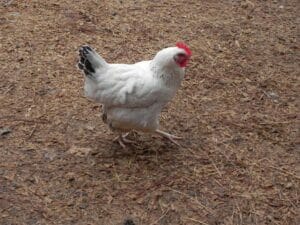 For some of us, there’s yet another piece of crucial evidence that our world has decided to renew itself. Local chickens are laying eggs again.

The timing is perfect because Easter, Passover, and the Spring Picnic Season are just around the corner. All of the above require vast quantities of eggs.

It’s enough to make a person want to break out the flipflops and the deviled egg plates.

Humans have been consuming bird eggs since the earliest of times. Ancient Romans ate peafowl eggs. The Phoenicians liked ostrich eggs. Gourmets from many nations have long preferred quail, plover, partridge, duck and goose eggs. Hungry humans have even invaded the nests of reptiles: Turtle eggs are prized in some cultures, and alligator eggs are considered fair game during lean times.

But nothing beats a good chicken egg. The chicken was domesticated as early as 6,000 BCE in China, as much for its eggs as for its tasty flesh. Historians and archeologists also have found references to ancient Egyptian and Classical Roman breads and cakes containing eggs.

The egg, for obvious reasons, is a universal symbol of new life, fertility and rebirth.

• The ancient Hindus described the beginning of the world as a cosmic egg.

• The Norse and Saxons attributed egg-like characteristics to the goddess of light — Eostre, overseer of the season of the growing sun and new birth, whose very name derived from the German ost, meaning east, which also symbolized the direction of the rising sun.

• Iranians and their predecessors, the Persians, decorated eggs to celebrate the Iranian New Year that falls on the Spring Equinox around March 20-21.

• The Jewish celebration of Passover includes eggs, to symbolize sacrifice and rebirth.

• Christians adopted the egg as a symbol of the resurrection of Jesus. The tradition of dyed Easter eggs began with Orthodox and Eastern Catholics dyeing eggs red to represent the blood of Jesus Christ shed on the cross.

The egg may be the ultimate symbol of new life springing forth. But it’s also one of nature’s most perfect food sources. Changes in feed given to chickens have resulted in healthier eggs than those produced commercially even 30 years ago. Modern eggs are 64 percent higher in vitamin D than eggs in 2002, and also are lower in cholesterol, down to 185 milligrams per egg yolk.

Eggs are graded into sizes that include peewee, small, medium, large, extra large and jumbo. Even within these grades, the eggs will vary in weight. It’s the carton weight that matters more than individual eggs contained in the carton. That’s why sizes will look different in the same carton! Weights per dozen eggs are as follows: 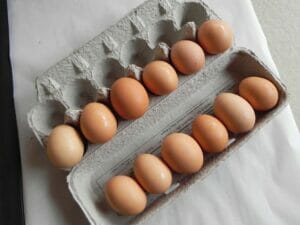 Antique recipes calling for eggs are tricky to convert. Small or medium eggs might be the best options. Professional cooks often rely on volume measurements rather than quantities. For example, a large egg, when cracked, yields about 3-1/2 tablespoons of liquid. The large yolk will be about 1-1/2 tablespoons and the white about 2 tablespoons. If using extra large eggs, the measurement will be 4 tablespoons, medium eggs will average 3 tablespoons, and it’s usually the egg white that makes up the difference.

The season of the year, breed of hen, type of feed, and cooping conditions play key roles in determining size, weight and flavor of chicken eggs. When not living in artificial cooping conditions, chickens produce fewer eggs October-March, with significant increases April through September except during extreme heat spells.

Eggs taste pretty much the same, whatever the breed or color. Brown eggs tend to cost more because they are laid by hens that run larger and eat more than hens that lay white eggs of exactly the same size.

HOW TO HARDBOIL AN EGG

Many factors affect length of time required to cook the perfect egg, including size of the pot (1.5 qt or 3 qt or 4 qt), temperature of the eggs before cooking (fridge temp is around 37 degrees F), size of the eggs, and type of cookware. Experiment with your own. A green ring around the yolk indicates the egg was overcooked, causing the iron of the yolk to combine with the sulfur of the white. To prevent the green ring, immerse cooked eggs in cold or iced water to halt the cooking process.

Traditional Method 1: Place large eggs in a single layer in a saucepan just large enough to accommodate them all. Add cold water and cover the eggs by an inch. Add 1 T salt or 1 tsp of vinegar to the water to prevent egg white from leaking if eggs crack, and to make it easier to peel them once cooked.

Turn burner to medium-high and bring to a low boil (which is about 205˚F). Using timer, boil for no more than 3 minutes. Cover and remove pot from heat. Allow to sit for 5-10 minutes, covered. Remove eggs and plunge into iced or chilled water; or, if cooking only a small quantity, drain the pan water and run cold water over the eggs. Crack both ends of the egg and peel under running cold water. If an egg proves difficult to peel, crack it all over by rolling it on the counter, and submerge again in cold water for about 10 minutes. The cold water will seep under the shell.

Traditional Method 2: Bring a pot of water to a boil and use a slotted spoon to lower the eggs into the pot, in a single layer. Cook for 10 minutes, remove from burner, cover and allow to sit for 2 minutes. Drain and fill pot with icy-cold water. Immediately begin peeling the eggs under cold running water.

Amazing Method for Easier Peeling: Use a steamer insert for a 3-quart pot. Fill water in the pot to below where the steamer bottom sits. Bring water to a boil, covered. Position a single layer of eggs in the steamer basket and lower into position over the pot of boiling water. Cover and continue steam-boiling for 20 minutes. Remove steamer basket from heat and immerse the eggs in ice water. They should peel easily! 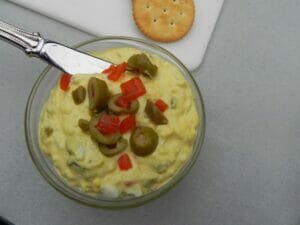 This is the perfect solution for a light lunch or brunch. The salad will keep up to four days, refrigerated.

Prepared yellow mustard to taste (about 1 small squirt per egg)

Peel eggs, cut in half, and pop out yolks into a small mixing bowl. Mash egg yolks into a paste consistency. Add just enough mayo to blend. Mixture will be stiff. Add a few drops of mustard (up to 1/2 tsp). Work in the cayenne. Mix well. Coarsely chop eggs whites, mix into yolk paste. Add a few drops of cider vinegar to taste; continue mixing. Salad should be light yellow, and egg whites well blended, but fluffy.

Deviled Egg Salad Variation: Reduce amount of mayo. Mash the egg whites into the yolk paste. Mash and fine-chop 2 to 4 T of sweet pickle relish; mix into the paste. 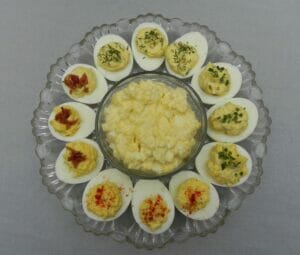 Every cook has his or her own twist on deviled eggs, which are a fundamental component of Southern potluck dinner gatherings. There can NEVER be enough deviled eggs at the potluck. 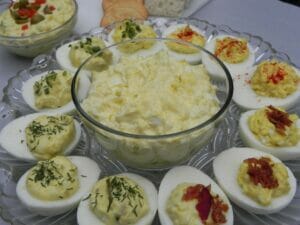 Peel the hardboiled eggs. Decide whether to cut the eggs vertically or horizontally. Cut each in half and pop hard-cooked yolks into a small bowl. Position the egg white halves in egg plate. Mash yolks with a fork or pastry blade until no lumps remain & yolk has a paste consistency. If broken egg whites are available, mash them into the yolk paste. Sparingly mix in salt and pepper to taste.

Carefully add mayo, working it in until the paste becomes of spreadable consistency. Blend in mustard and cayenne. At this point, the spread should still be stiff enough to hold a peak and not run.

For more fun facts about all kinds of eggs, click here.