Students, faculty and alumni and people of Oxford came together at the historic Circle on the University of Mississippi campus at noon to hear one thing, and that was the support of reinstating Chancellor Dan Jones’ contract. Although 5,000 individuals were estimated to show up, a round-about of 2,500 people showed up enthusiastically ready to take control of the situation at hand.

One of the event’s co-organizers, Ryan Felder took charge with his speech saying, “As I read the creed last night I was reminded of how often I fall short of its tenants. God knows I’m not the best student by most measures and I often find it hard to respect the dignity of each person.  It’s a challenge to live up to these words.  It is difficult to be fair and civil in a world of imperfect individuals, of which I am also imperfect. And while I originally intended for this speech to be about how Chancellor Dan Jones embodies these values that are expressed in our creed, I now realize that he too falls short.  All except for one.  As the leader of our university community, Chancellor Dan Jones truly attempts to uphold these values.  But more than that, he encourages us to try to do the same. Not with words, not with Facebook statuses, but with his actions.”

Felder went on to talk about a 25 percent increase in endowment and enrollment rates since Chancellor Jones had been with the university. He praised Chancellor Dan Jones’ work in medical missionaries in Southeast Asia, picking up people’s dinner plates at a dinner when they finished eating, and even taking time out of his week to write a thank you letter every week to everyone that he feels indebted to.  Felder went on to say, “What of the man who has instilled in students, faculty and staff the desire to put the needs of others before themselves?  Isn’t that the leader Ole Miss needs? Isn’t that the leader that this state desperately needs?”

Every speaker that stood on that stage in front of the Lyceum has something positive to say about Chancellor Dan Jones and his endeavors with and for the university.  Under the chancellor’s leadership, ACT test scores and GPA for incoming students have substantially increased every year since 2010.  William Boyles, ASB spokesperson for this event, said “Whereas over the past three years, fundraising for the University of Mississippi has increased over 100 million dollars from private donors.  Whereas the University of Mississippi has experienced an increase in enrollment from 14,159 to 17,360 during Dr. Jones tenure as chancellor.” 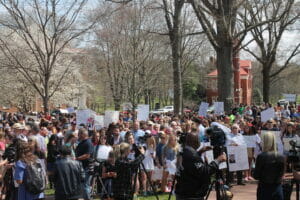 Not only has Chancellor Dan Jones made an effort to dedicate himself to improving and bettering the university on race and its national image, he has gone out of his way to make individuals feel important and welcomed to the university.  One student, Sierra Mannie, senior classics major, made it clear where she stand with her support of reinstating Dr. Dan by saying, “It is a hard job sometimes to be a student of color and a woman of color to love this place with everything that happens here.  With the work that I’ve put in and the work that Dan’s put in, I feel safe here because of his leadership.”

The university has thrived in the growth of the Sally McDonnel Barksdale Honors College by a whopping 42% since Fall 2009 under Chancellor Jones’ leadership.  The University has seen huge successes in having several appearances in national tournaments and bowl games, all under Dr. Dan Jones’ leadership. The students. faculty, staff and alumni owe so much gratitude to Dr. Jones in everything he has done to better the university as a whole.

The co-organizers of the event did an excellent job in getting the crowd involved by singing the Alma Mater and chanting, “Dr. Dan, he’s our man, we won’t let this decision stand” and “We stand for Dan, we stand for Dan.”  The reaction was overall positive and now all everyone can do is wait.  Wait in hopes that the vote is changed and Chancellor Dan Jones gets his seat back.

Brittany Vaughn Bugg is a staff reporter for HottyToddy.com. She can be reached at brittany.bugg@hottytoddy.com.