The Students for Chancellor Jones is a student-led group behind the rally scheduled for this afternoon in the Circle in front of the Lyceum.

The University of Mississippi officials were preparing the Circle early this morning for the demonstration in support of Chancellor Dan Jones. Red and blue trash cans, normally used for activities in the Grove such as home game weekends, are positioned in the Circle along with a temporary stage in front of the Lyceum.

Initial reactions to the news of Chancellor Dan Jones’ contract non-renewal by the IHL board last Friday catalyzed the group’s creation. A visit to the group’s website reveals a timeline of the students’ lightning-quick support of their chancellor. 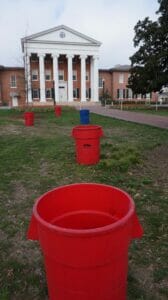 According to the press release sent to media by The Students For Chancellor Jones, the purpose of the rally is to ask the Board of Trustees to reconsider their decision to not renew Chancellor Jones’ contract. The rally will begin with a brief introduction from the rally organizers. The group invites representatives from student, faculty and alumni groups to publicly respond to the IHL decision. In between speakers the organizers will lead the crowd in positive chants to show support for Chancellor Jones.

The group encourages all supporters, whether they attended or not, to contact the Mississippi IHL, their senators and representatives and their friends and family via social media. In the press release the group says the rally is not to attack or criticize individuals but to draw attention to the process that led to the board’s decision.

The group expressed its reasoning in the press release: “Students for Chancellor Jones wants to bring attention to the decision that has been made by the Mississippi Institutions of Higher Learning. This decision sets a dangerous precedent that any sitting university president can be removed in a closed executive meeting, without consulting the public, despite academic, financial and athletic success at the university. Whereas one of the only balances to the power of the Mississippi IHL is public scrutiny, we argue that the public has a right to be included in all decisions by the Board of Trustees. We also call for the immediate reinstatement of Chancellor Daniel. W. Jones. Read our open letter to students at all Mississippi public institutions here.”

As the group confirms more details of the event the information will be distributed via its social media channels on Facebook and Twitter.

The group representatives want to note that the University parking officials has assured the group the parking permits will not be necessary for visitors. The attendees are encouraged to use the Oxford-University Transit buses. The round bus fares are $2 per person. Those who must park on campus can use either The South or Kudzu lots serviced by the Gold Line OUT bus, the Jackson Avenue Center serviced by the Brown Line OUT bus or the Silver Pond lot on Sorority Row.

Callie Daniels is a staff reporter with HottyToddy.com. She can be reached at callie.daniels@hottytoddy.com.