Take a Video Tour of the Oxford’s New Fire Station No. 1

Tomorrow is a long-awaited day for Oxford firefighters: the Fire Station No. 1 dedication, celebrated with a cookout and an open house.

For those who are unable to attend the open house can enjoy this video tour made by Samantha Mitchell, graduate student in the IMC program at Meek School of Journalism and New Media.

The fire station, located on McElroy Drive next to the post office, has a lot of space on the three acre site. In fact it has enough space to share the location with the city’s first dedicated emergency operations center. The new location also enables the firefighters ensure airport safety against fires without having to be at the terminal for long hours in readiness for a potential disaster during the Ole Miss football game weekends that draws numerous planes to Oxford.

Oxford Fire Chief Cary Sallis said, “(The building) has a whole lot more room now. Now we can have offices instead of offices in the attic and seven men on one couch.”

There is a hallway of offices with a conference room, an enjoyment to Chief Sallis who said that they can now meet people at the fire station instead of meeting with them at the City Hall as they did in the past.

Most of the firefighters seem to be enjoying their new break room furnished with several kickback armchairs, a large screen television and a furnished kitchen. Upstairs there are 13 individual bedrooms, some which firefighters made themselves comfortable in quickly with framed pictures of Mississippi wildlife and gaming consoles for their televisions. The younger firefighters also have the fire pole, a functional novelty, to shimmy down whenever an alarm sounds. 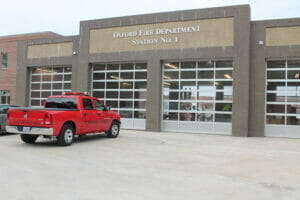 The new garage, with fire engine red flooring, holds four large fire trucks, including one for airport emergencies. Attached to the garage is a gym full of equipment customized with Ole Miss flair. The firefighters could work out in the gym from 7:30 to 8:30 a.m., during lunchtime and any hours after 5 p.m.

“The location on Lamar didn’t have any room to grow,” said Chief Sallis. At Station 1 the firefighters have easier access to the growing population in Oxford, especially as new neighborhoods and apartment complexes are added to that region of Oxford.

The fate of the old fire station on North Lamar is uncertain but Oxford Alderman 1 Jay Hughes has a plan for it: turn it into a green space.

“I hope it will be a park, and plan to push for that,” said Alderman Hughes. “However, nothing is certain and so many things are being discussed. I believe the future of it will be an agenda item at our special work session meeting at City Hall on Tuesday, April 7.”

Fire Station No. 2 near Washington and Jackson avenues has also closed with the previous Station No. 1. That station’s future is also unknown but will be discussed. Meanwhile the Station 2 crew is working at the fire station located on University of Mississippi campus near the intramural fields.

Fire Chief Sallis hopes to have a new fire station built, budget allowing. But he is more hopeful to have a training facility built on the spacious land so the firefighters could train onsite and keep up with fire policies development.

Meanwhile the firefighters will enjoy having more room to relax and strengthen while working 48 hour shifts to keep Oxonians safe. All are invited to attend the open house that will be tomorrow at 2:30 p.m. at Station No. 1.

Callie Daniels is a staff reporter with HottyToddy.com. She can be reached at callie.daniels@hottytoddy.com.