“It’s a great honor that they thought to include us,” general manager of Gus’s World Famous Fried Chicken in Oxford Brad Whiteside said. “It’s a huge thrill,” on coming in at the number one spot for America’s 50 best fried chicken spots.

The first generation of Gus’s World Famous Fried Chicken began in the 1950s by Napoleon, also known as “Na,” and Maggie Bonner in downtown Mason, Tennessee. Little did these two know that their famous recipe would still be a huge phenomenon today. It’s said that the couple was not wealthy and the people of Mason helped them raise money to move to a bigger location in the early 70s where business too off. Gus’s original name was ran under “Maggie’s Short Orders” until their son, Vernon Bonner, re-opened the business with his wife Gertrude taking on the now acclaimed name, Gus’s World Famous Fried Chicken.

“Gus’s World Famous Fried Chicken is honored to be named the top fried chicken spot in the U.S. Gus’s Oxford is committed to upholding this tradition by serving the very best fried chicken possible coupled with outstanding service,” Lockwood Griffin, Owner of the Oxford location, said. “In Oxford, we have recently added several new menu items including a new chicken tenders salad, a new tenders wrap along with fried okra now featured as both an appetizer and a side.  We hope folks will visit us soon and give us their feedback on these additions to our menu.”

The savory spices light your tastebuds up giving you a completely different take on fried chicken. As you bite into Gus’s chicken you can taste the crisp crunchiness of the skin, then the juices and tenderness of the white meat hit your tongue and it’s game over. It definitely gives all other chicken places a run for their money. 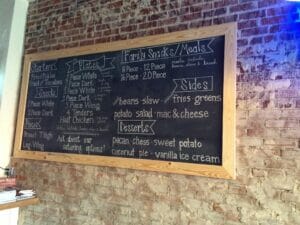 One could almost feel like they’re sitting in Na and Maggie’s old place. Every piece of chicken is hand prepped and seasoned resulting in it’s vigorous flavors.

The golden-brown crust on the outside locks in the juicy exterior, just as it should, and the seasoning of salt and cayenne shines through. So kick back at a gingham tablecloth-covered table, listen to the tunes playing from the jukebox, and await the arrival of a meal well worth it.

Gus’s makes it easy for families to eat by offering family snacks and family meals. Their menu offers Southern fried appetizers and chicken, family and individual meals, a variety of brewskis and desserts. If fried chicken isn’t on your menu, Gus’s also offers a variety of salads.

Brittany Bugg is a HottyToddy.com staff writer and can be reached at brittany.bugg@hottytoddy.com.