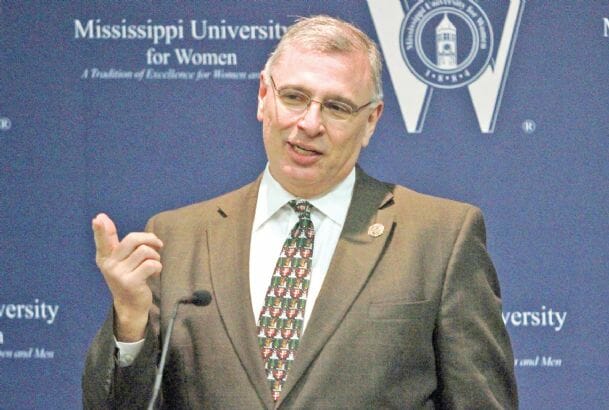 A week before he was expected to become commissioner of Mississippi’s Institutions of Higher Learning board and help lead the state’s eight public universities, Jim Borsig announced Thursday he wanted to stay on as president of Mississippi University for Women and forego leading the trustees.

Borsig was scheduled to follow former commissioner Hank Bounds next Wednesday, April 15, who left the board to become president of University of Nebraska.

“This is something I had been praying about and reflecting on for some time,” Borsig told the Clarion-Ledger in a phone interview Thursday. “And yesterday is when I sent the letter to the board asking to remain as president with my commitment to serve through the transition. It’s as simple as, at this point in my life and career, I feel a strong calling to serve this university as president. Both jobs are important. I have complete confidence in the Board and I support this university system. It’s as simple as where I believe I am called to serve.”

Borsig’s resignation comes one week to the day that University of Mississippi chancellor Dan Jones announced he would not continue negotiations with trustees and would leave the school in mid-September. As commissioner-elect during the time, Borsig was the representative of the board tasked with the negotiations between Jones and the IHL.

The same board he’s leaving will have to approve his presidency of MUW as they approve all university heads. Borsig was first appointed to be the university’s 14th president in November 2011.