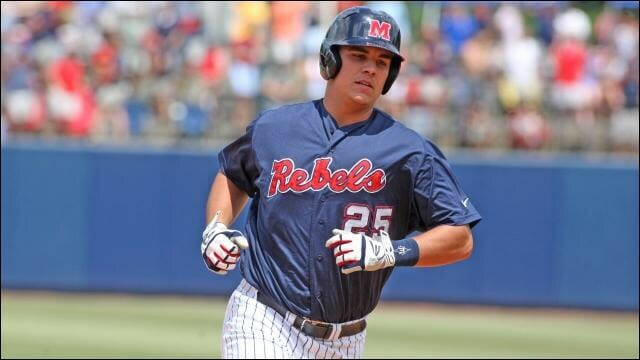 Trailing by five runs with two outs in the bottom of the ninth, the Ole Miss baseball team rallied to tie the game, forcing extra innings before scoring the game-winning run in the 10th to cap off the comeback and beat rival Mississippi State, 8-7, Saturday evening, May 9, at Swayze Field. The wild come-from-behind victory completed the Rebels’ (28-24, 14-13 SEC) SEC series sweep over the Bulldogs (24-27, 8-19 SEC), while increasing their winning streak to a season-high four games.

The win also marked a season sweep for Ole Miss over Mississippi State as the Rebels claimed the Governor’s Cup, April 28. The last time the Rebels won all four games over MSU in one season came during the 2010 campaign.

Sophomore Colby Bortles delivered a 2-RBI single up the middle that tied the game in the ninth, and freshman Nic Perkins hit a chopper into center field that plated pinch-runner Tate Blackman for the walk-off hit in the 10th. Blackman had the Rebels’ only other walk-off in 2015, earlier this season against Arkansas-Pine Bluff, March 18.

The five-run comeback was the second time this season that Ole Miss rallied after trailing by four-or-more runs entering the ninth inning. The Rebels were down four against No. 1 Vanderbilt, April 10, before Bortles’ grand slam tied the game in the ninth. Ole Miss went on to win that game, 6-5, in 16 innings.

Ole Miss improved to 3-0 in extra-inning games this season with all of them occurring in SEC play. The Rebels defeated a pair of top-ranked team in extra innings earlier this season in LSU and Vanderbilt.

Senior Sikes Orvis led Ole Miss at the plate with a career-high four hits, including a pair of solo home runs. The pair of homers gave Orvis his third multi-home run game of his career as well as the second in the past four games. The two-homer day brought Orvis’ total to 13 on the season, 32 for his career, and five over the last four games.

Sophomore Wyatt Short (4-1) earned the win after pitching a perfect 10th inning that included two strikeouts. The victory completed a fantastic weekend for the southpaw as Short also recorded saves in the two previous games against the in-state rival.

Up next, Ole Miss will take its four-game winning streak to Jonesboro, Arkansas on to take on Arkansas State, Tuesday, May 12. The two teams are slated for a 6:30 p.m. CT first pitch in the Rebels’ final midweek game of the regular season. As always, fans can catch the Rebels in action on the Ole Miss Radio Network.