Throwing away fresh flowers that were only cut for a few hours for an event doesn’t feel right, does it? Betty Musselwhite agrees.

Musselwhite, a retiree who has moved to Oxford three years ago with her husband Doug Bloom, was playing mahjong with her friends in the Plein Air in Taylor. She noticed people were throwing out floral arrangements.

“They were lilies, some not even opened yet, that I knew would last ten more days,” said Betty. She reckoned that the floral shops probably couldn’t reuse these since they were already paid for and used. The florist getting rid of the flowers noticed her and offered her and her friends the flowers.

She was happy to give the flowers a home and they lasted a little over a week at her house, but the idea didn’t hit her until a close friend’s son passed away in a wreck. She saw how her friend made a tiny happiness out of an immense tragedy: she took the flowers from the funeral and donated them to hospitals in Memphis where they cheered up the patients.

Betty was looking for ways to dedicate her free time in retirement life to charitable service, and those two events gave her an idea: she could reuse the flowers and surprise people who could use a little brighter afternoon. And in a serendipitous moment she saw that her husband’s last name was the perfect name for the charity: Bloom Again Oxford. 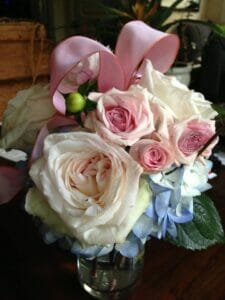 “I want to make it clear that I don’t want to compete with the floral shops,” said Betty. “These flowers are not for profit but donated to make a sick person or a person in public service happier.”

The intended recipients of the flowers are those in hospitals, hospices and nursing homes and those in public service. “We won’t do birthdays or Mother’s Day,” said Betty. “We don’t gift individuals but rather an organization or a group of people.”

Betty explained that the flowers on hand could be gifted all at once in a surprise delivery and then the arrangements can be arranged throughout the building.

She is in the beginning stages of the charity, and the non-profit is completely volunteer-run by herself and her friends. Along with collecting recommendations of places to drop off the flowers Betty is currently accepting donations of vases and coffee mugs.

“My friends at the yard sale would see me and then bring out boxes of coffee mugs or vases they hid away for the organization,” said Betty.

She is especially looking for donors willing to donate flowers after an event or a wedding. So far she has one Oxford bride who is marrying this October who pledged her flowers to be reused by Bloom Again Oxford.

Anyone having an event or are interested in donating flowers can call 901-485-5212 or email bloomagainoxford@gmail.com. Betty said, “They can contact me via text, phone or email with the date and I will make arrangements to come pick up their flowers and touch base with their florists on the best pick-up times.”

She will then send the donors a photo per request of the small bouquets made out of their donated flowers with information on their whereabouts so they’ll know she “paid their kindness forward.”

Callie Daniels is a staff writer/reporter at HottyToddy.com. She can be reached at callie.daniels@hottytoddy.com.