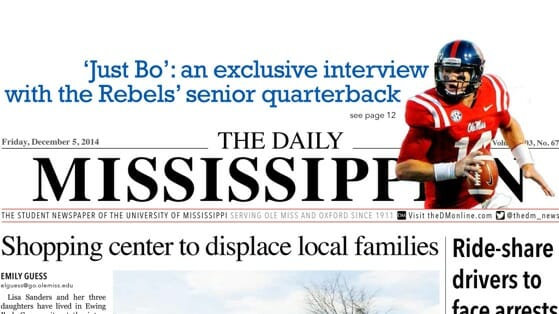 The University of Mississippi’s Daily Mississippian has been named one of the nation’s top three collegiate daily newspapers by the Society of Professional Journalists as part of the group’s prestigious Mark of Excellence Awards.

The Daily Mississippian was honored as a finalist in the SPJ’s “best all around” large daily newspaper category. The other finalists were The Daily Bruin of the University of California at Los Angeles and The State News of Michigan State University. The State News won top honors overall.

Lacey Russell, a senior journalism major from Tupelo, and Adam Ganucheau, who graduated from UM in 2014, served as editors-in-chief during the period the newspaper was honored. During Russell’s staff’s first meeting to begin the 2014-2015 school year, her team set a goal to be one of the hardest working staffs in the nation.

“It was a huge honor just to win in our region and I never imagined that we would go on to be a national finalist,” Russell said. “It’s exciting and also extremely gratifying to see all of our hard work pay off.”

Ganucheau, a native of Hazlehurst who graduated in 2014 with a degree in journalism, is a reporter for Alabama Media Group in Birmingham. He said that when he became DM editor for the 2013-2014 school year, the staff set a goal to provide “high-quality, meaningful journalism for our campus and community.”

“We were able to experience firsthand the impact a strong college newspaper can have on a campus,” Ganucheau said. “I truly marveled every single day at the talent we had on staff at The DM, so it comes as no surprise to me whatsoever to have been selected as a top student newspaper in the country by SPJ. They earned every single bit of it and I couldn’t be more proud of the year we had.”

In 2014, UM student journalists tackled a first-person enterprise piece on running. They told the personal story of how residents in a local mobile home park were being affected by new retail development in Oxford. Among the other work honored by the SPJ: articles on the hanging of a noose around the neck of the James Meredith statue on campus and an in-depth profile of Ole Miss quarterback Bo Wallace, who helped bring the school’s football team back to national prominence.

Patricia Thompson, director of UM Student Media and an assistant professor of journalism, is faculty adviser for The Daily Mississippian. She notes that the nation’s top student newspapers enter the SPJ contest, so the competition is especially tough.

“The award honors the excellence of the entire staff – the editors, writers, designers, photographers and cartoonists who spend many hours each night producing the newspaper,” Thompson said. “We were blessed the past two years with strong leadership from journalism and liberal arts majors, as well as design and photography and writing guidance and advice from journalism faculty.”

“This honor is the result of Pat Thompson’s great work,” Norton said. “She recruits committed students. She mentors them, and she supports their efforts. She has elite media experience and brings years of accreditation reviews and great common sense to her position as director of the Student Media Center.”

Charlie Mitchell, assistant dean of the school, credits the passion and drive of the students who work at the media center, along with Thompson for being an inspirational resource for them. Thompson instills a passion for quality and attention to detail in the students she works with, which has served them well in their reporting, editing, photography and design, he said.

“As it happened, the competition period covered an especially ‘newsy’ period on campus, and the students rose to the challenge of reporting tough stories aggressively and in keeping with the standards of the Society of Professional Journalists,” Mitchell said.