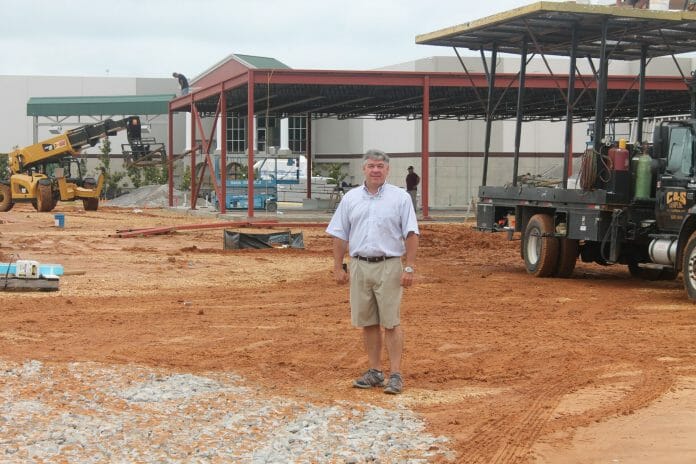 Jeffrey Hollis is the owner and operator of the new Marketplace at Oxford Commons and Marketplace Wine & Spirits. Hollis has been in the real estate business in Oxford since 1997.

Marketplace at Oxford Commons will be branded a Shell station. It will feature five pumps with diesel at each pump, with a wine and spirits store attached to the left side of the building. The main convenience store will be complete with all the things you’d expect from a corner neighborhood store, plus a little more.

“We’ll have everything from a coffee bar to a fountain drink bar and also a milk shake bar,” Hollis said. “We’ll be able to do meat-n-threes: a heavy breakfast in the morning and a heavy lunch. We’ll have a 7:30 a.m. elementary school start, an 8:30 a.m. high school start, so our breakfast is going to be a big deal. But we’ll also be able to do meat-n-threes for lunch. We’ll do barbecue, ribs, smoked chicken and we’re just excited about the entire operation.”

Hollis said there was roughly 17 to 18 years of construction remaining on the Oxford Commons area, so the growth potential was staggering and he was very excited to be a part of it.

“We’re hoping to capture that growth with the Marketplace and tap into our market, which will be Oxford High School, all of the construction workers who will be onsite for quite a while,” Hollis said, “just because there’s really nothing close by to serve those needs. When you leave the Oxford Commons, it’s Highway 30 or University Avenue.”

Hollis said he plans on the store to be up and running at full capacity by the first of September 2015.

“We’re shooting for before the first Ole Miss home football game,” Hollis said, “which is September 5, so we’re hoping to be opened before then. Truthfully the weather has slowed us down with the opening by probably a month.”

Hollis added that he decided to open the Marketplace and Marketplace Wine & Spirits when he realized the growth potential for the Oxford Commons area and knew the possibilities for success were high.

“I’ve been in the real estate business and I’ve been an appraiser,” he said. “So, I’ve had my finger on the pulse of the amazing growth in Oxford in general, and more specifically, here at the Commons for quite a while. And things just sort of came together for us. I saw what was going on out in this area and decided to take a chance.”

Hollis said plans are in the works for a major Grand Opening blowout when Marketplace opens and he hopes everyone will come out and experience the store for themselves.

Marketplace at Oxford Commons is located at 701 Sisk Ave., just west of Wendy’s and just south of the Malco. Job opportunities are available and anyone interested is invited to come by and talk with Hollis.