Cuban Historian Speaks on Hemingway at Belfry in Oxford

This Friday night at Belfry in Oxford Dr. Victor Pina Tabio, a Cuban historian and nationally-known expert on Ernest Hemingway, will present a little-known story about Hemingway in Africa.

Tabio has traveled to Ventura, Miami and now Oxford for the first time. Milly West, a photographer and owner of Tres Puerta Gallery in Oxford who has traveled to Cuba several times, will join him in this exciting presentation. 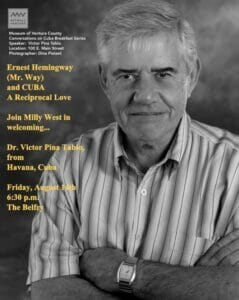 At Belfry, located just west of the Square on Jackson Avenue, the refreshments are at 6:30 p.m. with the presentation at 7:00 p.m. followed by art by Milly West and Tres Puertas Gallery. Additional parking is available in First Baptist lot. Two images of Hemingway in Cuba by one of Cuba’s best-known photographers, Osvaldo Salas, a few photos by Milly West from her book, Cuba for Keeps, and a couple of posters related to Hemingway and other Americans in Cuba will be on display at the Belfry for this event.

West said, “Victor is a Cuban historian and nationally known expert on Hemingway. He will present images to complement a little-known and exciting episode about Hemingway in Africa. He will also talk about Hemingway’s connection with Cuba and why Cubans still love him.”

She invites all attendees to visit her house and the small gallery located at 212 Bramlett Boulevard for an after party in the backyard. They are welcome to bring beer or wine.

West said that Tabio, her worldwide traveling friend, has enjoyed a personal tour of Faulkner’s home by Larry Wells, an interview with Rob Seigler at Oxford Eagle, and a visit with Joe York on the Square as well as meeting several Oxonians like Alissa, Richard and Randy Hayes.

She said, “Victor just arrived late Monday night and look at all we have done! I know you will all enjoy his talk about Cuba and Hemingway.”

She extends her gratitude to Jim Pryor and the Burns-Belfry Museum and Multicultural Center for hosting the event. The event is also supported by Andy O’Bryant and Yalobusha Brewery.

Callie Daniels is a managing editor at HottyToddy.com. She can be reached at callie.daniels@hotttytoddy.com.