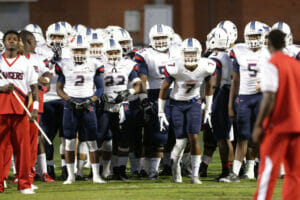 For the first time since the 2012 season, second-year head coach Jack Wright and the Northwest Rangers will open the season ranked in the NJCAA Football Top 20 Pre-season Poll.

Northwest is ranked 16th and is one of five schools from the MACJC in the poll. Reigning back-to-back national champions East Mississippi come in as the top-ranked team, while two-time south division champion Copiah-Lincoln enters at No. 7, followed by Gulf Coast at No. 9 and Jones County at No. 19.

Earlier in the week, the Rangers were picked to finish fourth in the conference standings by a vote of MACJC representatives behind EMCC, Co-Lin and Gulf Coast.

Northwest has made the playoffs 25 out of the last 33 seasons and ended 2014 with a second place finish in the north division, followed by a narrow loss to 11th-ranked Copiah-Lincoln in the first round of the state playoffs.

Northwest will kick off the 2015 campaign at No. 19 Jones County on Saturday, Aug. 29 at 7 p.m. Live video, audio and stats will be provided all season long at www.nwccrangers.com.