The 10th anniversary of Hurricane Katrina’s landfall is this Saturday, and today at the Square Books, UM faculty member Cynthia Joyce will read the survivors’ stories of mourning and recovery from 2005 to 2007 in her book, Please Forward: How Blogging Reconnected New Orleans After Katrina (UNO Press).

Ten years ago, Hurricane Katrina submerged 80 percent of New Orleans, causing $100 billion in damages. Even though their homes were gone, the New Orleans residents didn’t give up their community especially not online.

Cynthia Joyce, assistant professor at Meek School of Journalism and New Media, edited an anthology of online content from 75 individuals in the New Orleans area post-Katrina. Dating between 2005 to 2007, the survivors’ emotional turmoil seep through in posts ranging from journalistic accounts to job and pet announcements.

Joyce said in an email: “It’s a sort of digital/oral history meant to provide a first-person account of what it was like to live through the storm and its aftermath, told with on-the-ground immediacy.”

The New Yorker‘s Dan Baum and Sports Illustrated‘s Peter King are among the local bloggers in New Orleans in the book, their stories carrying same personal tones as the residents’ first-hand accounts. There are several accounts from the Mississippi Gulf Coast. 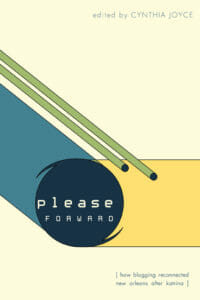 She said in the email, “In many ways, the anthology is meant to be a primer to newcomers — de facto ‘gentrifiers’ — a way to understand why longtime New Orleanians, and Katrina survivors in particular, are so emotional and resistant to change, and why they’re so seemingly irrational when it comes to pursuing conventional means of economic progress.”

Indeed, those who have never suffered the distinct tragedy of Katrina can begin to understand the emotional damage instead of assuming it while looking at pictures of flooded buildings and ruined infrastructure.

Brett Anderson, restaurants critic and features writer at NOLA.com and The Times-Picayune said in a review: “She has brought to light the one thing outsiders could never comprehend, at least until now: the deep emotional scar Hurrican Katrina’s levee breaches left on those who survived the disaster.”

The idea for the collection dawned upon her one day when she was searching online for a crucial account of Hurricane Katrina’s aftermath only to find the site down and the post forgotten. It was then she began collecting posts from the Internet. In the book, there are well-known stories that can be easily found with a search bar…and there are some that cannot be found online due to broken links and worn servers.

Her book shows how important the internet was as a gathering spot for the survivors as they sought for a community after their homes were ruined and their neighbors scattered across the states as refugees.

Jed Horne, author of Breach of Faith, Hurricane Katrina and the Near Death of a Great American City, said in a review of the book: “These are postcards from a city that was on the very edge. They are selfies shot against a backdrop of unprecedented catastrophe. For survivors of Katrina, the collected blog posts will kick up raw memories, some cherished, some still harrowing. Readers lucky enough to have only wondered what disaster is like will find an answer. It’s all here: the terror, the confusion, the compassion, the self-absorption, the posturing, the misinformation masquerading as insight – above all the ties that held us together and made recovery possible.”

She said, “At least half of the material in the book would have been lost to web erosion were it not for the Internet Archive and Wayback Machine… It’s a layer of digital history that’s since been overwritten or lost to server shuffles.”

Joyce will be at the Square Books at 5:00 to read excerpts from the book as well as signing. She will also moderate the first discussion this fall on September 1 at Overby Center among university faculty members who reported on Katrina’s destruction of New Orleans and the Mississippi Gulf Coast. .

To learn more about the book, visit UnoPress.org.