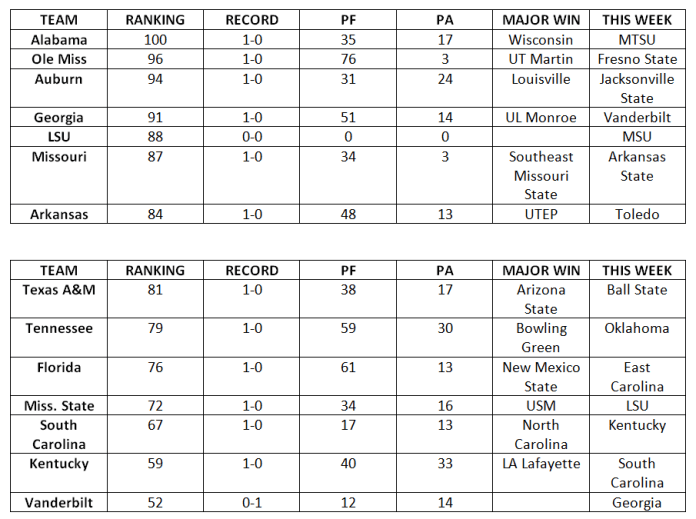 The Ole Miss Rebels even without Laremy Tunsil got off to one of the best starts in school history as they shot the Skyhawks out of the sky with a 73 point margin of victory. When was the last time anyone heard of a team scoring 40 plus points in one half while holding the ball for less than 9 minutes? I didn’t think so! There were so many positives to be taken from this game and especially the play of quarterback Chad Kelly. Defensive standout Robert Nkemdiche looked every bit as the first team All American he is. What a performance!

But Reb fans, before we declare ourselves SEC Champions, let’s take a deep breath and think about the level of competition. Fresno State who also won easily will be a bigger challenge followed by what’s shaping up to be the game of the year…at Alabama.

The number one team as of now is still Alabama. The Crimson Tide manhandled Wisconsin routing them 35-17. Junior running back Derrick Henry scored three touchdowns and first time starter at quarterback, Jake Coker, had a solid debut while directing 28 first downs and 502 total yards. Of those, 264 were through the air. Bama’s defense controlled the line of scrimmage and the offense had no turnovers. Playing the Tide in Tuscaloosa will be a tall order!

Elsewhere around the league, Auburn did not look good especially the QB play and escaped from Louisville with a 7 point win. The biggest surprise of the week was the upset win of Texas A&M over Arizona State by a 19 point margin! Everyone won except Vanderbilt who showed less energy than Jeb Bush in losing to Western KY at home. Florida came out of the gate strong as did Georgia, Arkansas and Missouri. Tennessee struggled with Bowling Green for 3 quarters while SC and Kentucky barely won against so so competition. LSU’s game with McNeese State was cancelled forcing the Bengals to open the season in Starkville. State did not look sharp in their 18 point win over USM.