Vassallo Interviews: The General’s Treasures from the 1950s 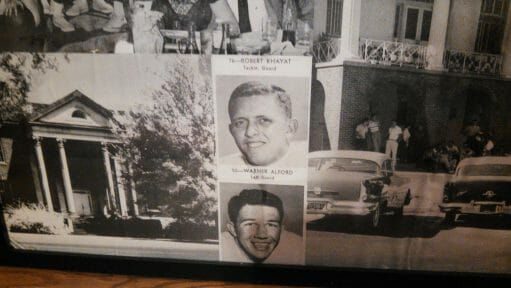 Jim (The General) Stephens has more “gold in them there hills,” as he “dug out” several classic photo collages from the 1950s. These photos will bring goose bumps to most Ole Miss alums as the world they depict of a bygone era will always be special in our thoughts and memories.

Specifically the photos are from the years of 1952; 1956; 1957; 1958; and 1959. Some of the biggest names ever associated with Ole Miss sports can be found among the historical campus scenes. Billy Brewer, Warner Alford and Robert Khayat were all easy to identify.

I quizzed the General as to how he obtained these memorable classics. 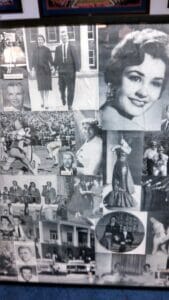 About 1981, the General became good friends with Johnny Moore (now deceased) who worked with the Ole Miss Food Service for more than three decades. Johnny was a classmate of mine at Ole Miss and a wonderful human being who loved Ole Miss to a degree few would ever comprehend. I can still envision Johnny now in the mid 1960s upon my many trips down the hill from Fort Baxter to the Johnson Commons. Johnny was quite a collector and knew how much the General appreciated all and anything that applied to Ole Miss.

Starting around 2000 and until Johnny’s untimely passing, (2010) the boys never missed an away game for Rebel football. It was during these many trips that their mutual interest in treasures such as these became apparent.

Because time and space will not allow us to concentrate on all of the years, we’ll focus our attention on 1959. We already mentioned the former Chancellor; Athletic Director; and Head Football Coach, but there are other superstars featured in addition. Current US Senator Thad Cochran; former Lt. Governor Brad Dye; and Ole Miss beauties Pat McRaney and Mary Ann Strong are also featured.

Ole Miss has never had a shortage of beautiful ladies and 1959 (as 2015) are typical years to highlight this tradition. My wife Rosie and I were recently in the Grove with squirrel chasers Trixi and Daphne when we walked past the current squad of Ole Miss cheerleaders readying themselves for the SEC run. A finer looking group would be impossible! They will make everyone proud upon meeting these great students!

People like the General are rare. It was a blessing that our paths crossed in later life. I may have finally met someone who loves Ole Miss more than me. I didn’t think this was possible, but I must concede. And when the General speaks, we all listen and not just at Kiwanis.