SEC Power Rankings: The Football Capital of the South Returns to Oxford

Let’s go straight to the heart of the matter. Ole Miss is now the league’s “Top Dawg” after stunning Bama and its home-field advantage by putting 43 points on the board.

Although Bama never saw it coming, Hoppy Langley did this past June when the former Allstar kicker predicted a Rebel victory. Following this huge upset win (8.5 points in Vegas) Hoppy summarized….”Fan bases and coaches aside, it always comes down to who has the better talent. And I felt with this being our third year of Coach Freeze’s recruiting classes, that this would be the difference in the game.”

There is no doubt who has the best talent starting with the quarterback and defensive line. Chad Kelly trumped both of the Tide’s quarterbacks and Robert Nkemdiche celebrated his birthday in Bama’s backfield. Congratulations are in order to EVERYONE associated with the Ole Miss football program as this was a team win in every respect. This victory has now placed the 2015 Rebels in the favorite’s role for the final 4 according to ESPN’s FPI (Football Power Index). The top four teams are Ole Miss, LSU, Georgia and Alabama. 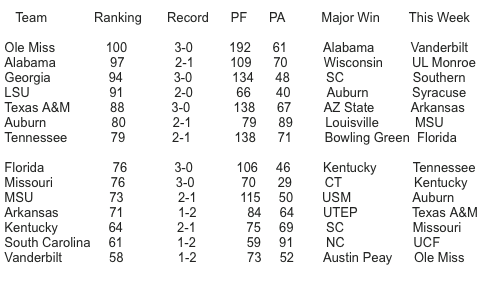 Elsewhere around the league Georgia destroyed South Carolina, LSU humiliated Auburn and their new defensive coordinator while Arkansas continued its free fall this past week at the hands of Texas Tech. Florida struggled with Kentucky in Lexington, but hung on for a 14-9 win, Tennessee steamrolled Western Carolina, Vanderbilt won its first game at the expense of Austin Peay, Missouri barely got past Connecticut 9-6 and Texas A&M gave up 27 points in thumping Nevada.

Oh yes, we almost forgot about Mississippi State, who ran away from NorthWest State scoring 62 points in the process. The loser of this week’s Auburn-Mississippi State game is relegated to the role of spoiler for the balance of this year.

Returning to the league’s best team, Ole Miss, the Rebels are fortunate to be playing the last place team in the conference this week after such a grueling victory in Tuscaloosa. However, the following week the Rebs will be seriously tested in the swamp against the now 3-0 Gators.

A major game of interest this week to Reb followers is Tennessee at Florida. If Ole Miss continues to improve and can stay basically injury free, there is no ceiling for this team. My preseason prediction of 11-1 is no longer laughable or unbelievable. Take a reality check SEC Network, Ole Miss has arrived. Live with it!