Ole Miss played a lackluster game versus then 14th ranked Vanderbilt and now has fallen to third in the Power Rankings. The first three-quarters were simply awful from an Ole Miss perspective and with a break here or there, Vandy would have prevailed.

The Rebels need to get their act together quickly as undefeated Florida awaits in the Swamp after having come from behind to defeat Tennessee. Florida is now a force in the east and will not be an easy opponent.

Elsewhere around the league Georgia continued its winning ways and now is set for the week’s featured game by hosting Bama.

The top two teams have a great deal at stake especially the Tide who hasn’t started 0-2 in SEC play since 1984. Texas A&M squeaked past an improving Arkansas in OT while LSU had all they wanted on the road at Syracuse winning by 10. Kentucky thumped Missouri and South Carolina defeated UCF. 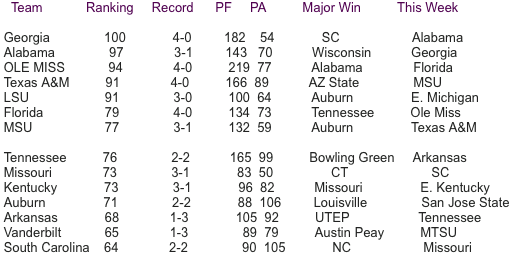 Auburn’s woes continued as their offense failed to show up against State losing a home game while dropping two in a row to SEC west opponents.

ESPN’s Football Power Index is presenting a different picture than the Power Rankings however. Ole Miss remains first followed by Baylor, USC and Alabama. This would be the four playoff teams as of now which would highlight a Rebel-Tide rematch. Other teams of interest are as follows: Georgia 5, LSU 6, Texas A&M 10, Tennessee 14, MSU 22, Florida 23, Arkansas 29, Auburn 34, Kentucky 45, South Carolina 47, Memphis 50, Missouri 51 and Vanderbilt 61.

TCU has dropped to eighth, but still remains a factor in the bowl playoff championship. Looking ahead to the first weekend in October, the Ole Miss-Florida and Alabama-Georgia games top the billing while other key contests have MSU at Texas A&M, Arkansas at Tennessee and South Carolina traveling to Missouri.

The winners of these five conference shootouts will find themselves in a strong position moving forward. The Rebels confirmed Saturday night in Oxford that looking ahead can be dangerous to your health as Vandy came to play. Lee Corso predicted Saturday morning that the Rebs would “run the table,”  but there is a great deal of football left to be played as Saturday night unveiled!