Note: Chad Kelly threw the most passes in a game last weekend against Vanderbilt as he had 42 pass attempts. I think we will give Kelly a similar amount of passes against Florida.

Note: Jaylen Walton had one of his better games in his career as a Rebel as he had 21 carries for 133 yards and a rushing touchdown against the Commodores. I believe he will still see the two-headed attack at the running back position with a little bit of both Jaylen Walton and Jordan Wilkins.

Note: Both of these receivers are coming off of momentum boosting performances as Laquon Treadwell went for 135 yards on eight receptions. Stringfellow caught his first touchdown of the season to go along with four catches and 71 yards.

Note: Cody Core has been really big throughout the season, but did not get going against Vanderbilt. He should pick back up where he left off in his great performance a couple of weeks ago against Alabama.

Note: Quincy Adeboyejo went without a catch in the game against Vanderbilt while Markell Pack had the kind of game we have been accustomed to seeing Adeboyejo have in the earlier weeks. Pack had six receptions for 52 yards last weekend against Vanderbilt. Adeboyejo will continue to be a force to be reckoned with.

Note: Early in last weekend’s game, some of the balls thrown to Evan Engram seemed forced. I continue to believe in what Evan Engram will bring to the game. Hopefully, he and Kelly will connect on the road at Gainesville.

Note: Hugh Freeze says that ‘progress has been made’ with the Tunsil situation, but there has still been no resolution. Fahn Cooper will get the start again for Tunsil. Cooper was named the SEC Offensive Lineman of the Week for last week.

Note: Javon Patterson continues to impress this year as he gets the start again as a freshman.

Note: Ben Still started the game last week but we saw a lot of both centers. I think that Conyers will get the start as he did in the first road game against Alabama.

Note: Justin Bell was going to try to give it a go, but Hugh Freeze said that he is not expected to play. Rod Taylor will try to get some reps at this position, but for now I will go with Aaron Morris to start as he did last week.

Note: Sean Rawlings will continue to get starts at the right tackle position with the absence of LaremyTunsil.

Note: Fadal Brown has been outstanding as he is another big key along with Robert Nkemdiche on this defensive line. Brown was tied for 7th in tackles in last week’s ball game with seven.

Note: Robert Nkemdiche continues to get pressure on the quarterback and continues to score on offense. He ran in his third offensive touchdown last week.

Note: These two will have to body up with the offensive lineman and stop the Kelvin Taylor rushing attack.

Note: The Rebels came very close to blocking many punts against Vanderbiilt and they finally got a big one with Marquis Haynes getting his hand on it. The Rebels will need some more big plays on special teams and defense this Saturday.

Note: These two players combined for 20 tackles and two tackles for loss as Denzel Nkemdiche led the team in tackles with 14 and DeMarquis Gates had six tackles.

Note: C.J. Johnson will have to contain Kelvin Taylor if he breaks past the defensive line. I look to see him shore up and prevent some of the explosive run plays we have given up.

Note: A.J. Moore looked like he will be a good replacement for the injured Tony Connor. Moore had four tackles and had some strong hits.

Note: Vanderbilt’s receivers were able to get their hands on a lot of footballs with the Commodores seeking out plays when we were not in tight coverage. This is something that can be sorted out heading into The Swamp.

Note: It will depend on where the Gators play Demarcus Robinson, but if he is out wide I believe Tony Bridges will have the assignment of guarding him. In my opinion, Robinson is the best receiver, but depending on if he is in the slot or out wide will dictate who covers him.

Note: Last week was the first week that Trae Elston did not have an interception. Elston did have seven tackles in the game, but will look to pick back up on his interception tear this Saturday.

Note: We will see how many chances Mike Hilton will get for an interception try in the secondary with Will Grier as the starting quarterback for Florida. Last week, Grier had an average of a little under seven yards per completion so Hilton could have some opportunities.

Note: Gary Wunderlich missed his first field goal of the season on a blocked kick against Vanderbilt. I do not think that will get to him and he will be fine against the Gators.

Note: Will Gleeson had an average of 50 yards per punt against Vanderbilt. If he can reverse the field like that in the Swamp, it will give our defense a lot of help.

Note: Nathan Noble gave up just one long kick return to Darrius Sims last weekend. The Gators’ kick returners are as threatening, but it’s always nice to see Noble kicking them out of the back of the end zone. 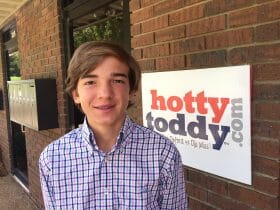