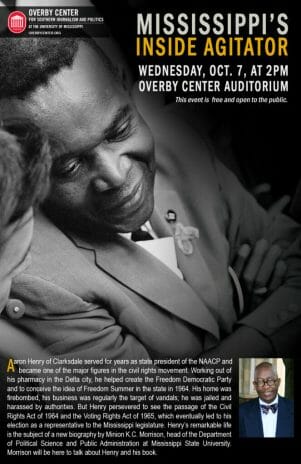 In back-to-back presentations next week of the old and the new, the Overby Center for Southern Journalism and Politics at Ole Miss will host a discussion of a biography of the late civil rights leader Aaron Henry of Clarksdale on Wednesday, followed the next day by a debate between spokesman representing the two sides of a current controversy involving a constitutional amendment to increase funding for education in the state.

K.C. Morrison, head of the department of political science and public administration at Mississippi State University, will be on hand at 2 p.m. Wednesday, Oct. 7, to talk about his biography, “Aaron Henry of Mississippi: Inside Agitator.”

At 2:30 p.m. on Thursday, Oct. 8, Michael Bentley, a Jackson appellate attorney, will appear on behalf of Amendment 42, while Rep. Greg Snowden of Meridian, speaker pro tempore of the Mississippi House of Representatives, will speak against it.

Both programs will be held in the Overby Center Auditorium. The events are free and open to the public. 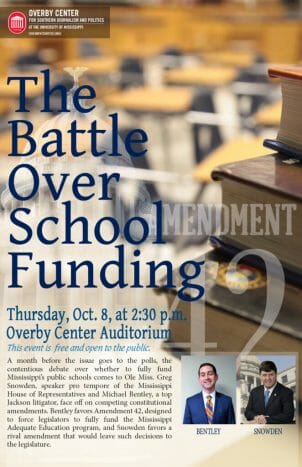 Morrison’s book follows the life of a black pharmacist from the Delta who became state president of the NAACP in the 1960s and had a major role in the tumultuous events of that decade.

Overby Fellow Curtis Wilkie, who was a young reporter in Clarksdale during that period and knew Henry well, will conduct a conversation with Morrison about his book. “Aaron Henry was a great, courageous Mississippian,” said Wilkie. “I’m glad that this biography will help keep him from being lost to history.”

Henry died in 1997, after having lived to see many of his objectives accomplished and to be elected, himself, to the state legislature.

The latest big issue in the state – Amendment 42 and a rival alternative Amendment 42A – have a place on the Mississippi ballot in November, and the measures will be debated by Bentley and Snowden in the program moderated by Overby Fellow Bill Rose.

“I can’t think of a more important issue in terms of Mississippi’s future,” said Rose. “These two speakers are well qualified to explain these amendments in terms we can all understand.”