SEC Power Rankings: The Night the Lights Went Out in Georgia

Alabama regained the top position in the league Saturday as the Tide routed Georgia in Athens 38-10. Georgia entered the fray 4-0 and a 2.5 point favorite reflecting the first time in six years that Alabama was an underdog.

In another game involving two 4-0 teams Ole Miss suffered one of the more costly losses in school history as 7.5 point underdog Florida slammed the Rebels in the Swamp also 38-10. Entering the game ranked third in the nation (Florida was 25) Ole Miss was beaten badly in every phase of the game reminiscent of last year’s Arkansas and TCU games.Elsewhere around the league Vanderbilt came from behind in the fourth quarter to edge MTSU 17-13 on the road; Kentucky won in OT versus E.KY 34-27; Texas A&M strengthened its position in the west with a 30-17 victory over State; Arkansas upset Tennessee in Knoxville 24-20; Missouri upended Steve Spurrier’s Gamecocks 24-10; LSU doubled E. Michigan’s score 44-22; and Auburn held back San Jose State 35-21. 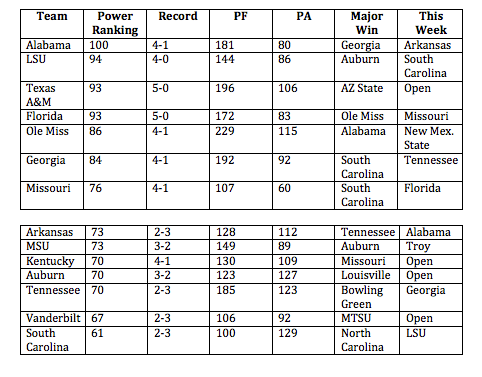 Looking ahead to the SEC Title Game in Atlanta, the smart money right now would pit Alabama against Florida. But here’s another theory. What if the previous two top dogs/Dawgs (Ole Miss and Georgia) who were both destroyed 38-10 Saturday regroup and regain control? Stranger things have happened. Should Tunsil ever return Ole Miss could be a changed team and the Georgia-Florida winner could ultimately rule the east. The Tennesse-Georgia loser this week will be a memory as will the Alabama-Arkansas loser.

It’s a long season and as the Swamp proved Saturday, it’s never easy winning on the road. The Ole Miss Homecoming could not be coming at a better time! Wear victory colors Saturday, whatever they might be.