While we’re almost to the midway point, let’s examine the remaining SEC games and attempt to project who will be in Atlanta. Here’s how it looks right now with several games capable of going either way. 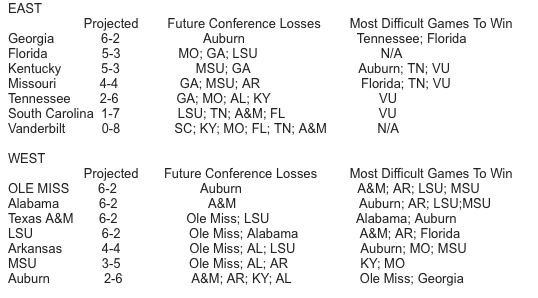 If the above forecast is accurate, Georgia will face Ole Miss in the SEC Championship Game in Atlanta. In the case of Ole Miss, the tiebreaker with all three 6-2 opponents in the west would make the difference. Even with 2 losses, Ole Miss could qualify for the BCS Final Four with a victory over Georgia and defeating the big three of the west. With all the key games remaining, there could be a number of twists and turns. However, Oxford will have more to say with the end result than any other city looking forward!