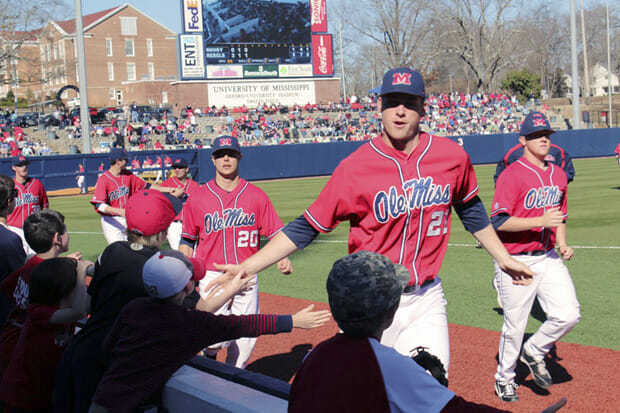 The Ole Miss baseball team kept working towards the 2016 campaign by competing in two more intrasquads this weekend. On Friday, the Red team claimed a 4-2 victory before Blue earned the weekend split with a 5-3 win Sunday evening.

In game one, Henri Lartigue’s 3-run homer propelled the Red team to a win. The big blast proved to be the difference as hits were hard to come by throughout the game; both teams combined for eight hits as the Ole Miss pitchers were in control. Freshman Connor Green started the scrimmage for Red, tossing three scoreless innings and only giving up one hit. Sophomore Will Stokes closed the contest, keeping Blue off the scoreboard for the final two frames.

A pair of freshmen paced the Blue team in the setback. Micah McHugh tripled for Blue’s only extra-base hit of the afternoon, while fellow classmate Parker Caracci pitched a solid two innings of relief without allowing a runner to reach base.

With the Ole Miss football team hosting New Mexico State Saturday afternoon, the Diamond Rebels waited until Sunday to wrap up their weekend. In the series finale, it was the Blue team’s turn to claim a two-run victory, 5-3. Two seniors led Blue to the win as Holt Perdzock and Cameron Dishon combined for three hits and three runs at the dish. Perdzock tallied a pair of hits, including a double, and also crossed the plate twice. On the mound, junior college transfer Austin Sanders and junior Wyatt Short each pitched a pair of scoreless innings out of the bullpen. Sanders retired all six batters he faced, while Short struck out two fellow Rebels.

For the Red team Sunday evening, J.B. Woodman went 3-for-3 in an impressive display of hitting. Sophomore Nic Perkinssmacked a pair of hits, and classmate Will Golsan added a triple in the Red loss.

Ole Miss will be back in action for another pair of intrasquads next weekend. Game times are still to be determined, but stay tuned to for updates on Twitter (@OleMissBSB) and the team’s Facebook page (Ole Miss Baseball).