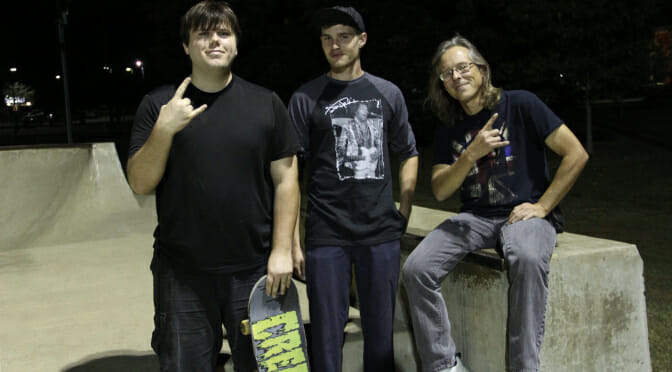 Shane Taylor, a friendly young bus driver for the Brown Line, has an interesting life when he isn’t behind the wheel of a bus.

The 25-year-old Oxford native not only works on campus as an Oxford-University Transit bus driver, but he also helps steer the hard rock band NoCanDo.

It originally was a pop-punk band called Between Famous and Nothing, but later changed to a heavier style and different name.

Goodballet’s stepson Michael McCullough was the original lead singer before he moved to Buffalo, Wyoming, in July, and Douglas Cosby stepped in as a replacement.

“NoCanDo got started June of last year,” Taylor said. “Then, we went and recorded in December of last year at Push Button Studios with Matt Chamblee, and we’ve just been going ever since.

“We’ve been to Memphis quite a few times, Tupelo, played a few spots around here. We’re not the type of music that’s really played at Rooster’s or The Library. It’s more of a heavier style of music.”

The band draws inspiration from other heavy and hard rock bands like Metallica, AC/DC, Pantera and Anthrax with its aggressive vocals and riffs.

Goodballet believes the age difference in band members gives the band its appeal.

“So you’ve got a rhythm section that has influences from the ’80s and ’70s, and Doug and Shane’s influences are gonna be from the ’90s and whatnot…so it’s not exactly what’s out there now.”

Not only do the members vary in age, they also come from different parts of the country. Goodballet’s native city is Cleveland, Ohio. Cople is from Memphis, and Cosby is from Peoria, Illinois.

This geographical diversity adds a certain uniqueness to their music that makes it universal, not just localized from one place.

Taylor grew up listening to pop-punk music, citing blink-182 as his favorite ’90s band, but he draws personal inspiration from the bands AC/DC and Black Sabbath, specifically Black Sabbath guitar player Tony Iommi, who has wooden fingertips after he lost the tips of his middle and ring fingers in a factory accident as a teenager.

Taylor said those wooden fingertips are why Iommi can play fast and heavy, which Taylor tries to mimic.

With Taylor’s long afternoon bus shifts where he doesn’t get off most nights until 7:30 p.m., it would seem difficult to find practice time, but the band is able to make it work.

“We usually practice Monday, Thursday, Friday and Sunday, so we usually get about four days a week in. We try to be as professional as possible and try and keep it tight.

“It’s really fun,” Taylor said. “The songs we do are all originals in our set and, so basically, we make time to practice. We go to work and do our regular jobs to pay our bills, but after that, then we’re always ready to practice.”

The band has garnered attention from Oxfordians and others nationwide. NoCanDo has been featured on 21 Internet radio stations and has been played on Rock 103 out of Memphis. Their next show is this Halloween at Proud Larry’s opening up for The Cooters.

“I’ve been telling everybody on the bus about it, like ‘Dude come on out.’ Like dress up. Do whatever you want to do. It’s gonna be fun,” Taylor said.

Taylor has worked in the OUT bus system for a few years, after getting the job offer from a family friend.

“I just had a feeling things were about to go downhill, so I just went ahead and got a job,” Taylor said. “I’ve been working there for like three years, and it’s been pretty fun ever since. You get to meet a lot of cool people.”

Many students, at every stop on the Brown Line, sit and chat with Taylor, sometimes about Taylor’s skating.

Students on the Brown Line, which runs from the Jackson Avenue Center Park-N-Ride lot to campus, note his friendliness and willingness to carry on conversations with students throughout his route.

“It’s always nice getting on the bus when he’s driving because he smiles and has a conversation with you,” said Meliah Grant, a sophomore communication sciences and disorders major. “I’ve heard him talk about his band on the bus before, and he seems really excited about it.”

You can check out Taylor’s band NoCanDo online at www.reverbnation.com/nocando or on their Facebook page, NOCANDO.

Article by Alice McKelvey as seen on OxfordStories.net.