Our 6-2 Ole Miss Rebels returned to winning ways Saturday night in Oxford (23-3) in one of their more impressive victories in the Hugh Freeze era.

Both the offense and defense played superbly and if not for four turnovers, the game could have turned into a rout early. The defense was the compelling story, however, as the Rebs held the Aggie offensive juggernaut to only 192 yards!

Across the league, Bama held on in Tuscaloosa to knock off Tennessee 19-14 and Vanderbilt won its first conference game in 23 months by clipping Missouri 10-3. State trounced the Kentucky Wildcats 42-16 and LSU dominated Western KY 48-20 in Baton Rouge.

In one of the wildest games of the season, Arkansas won out against Auburn in four OTs in Fayetteville by a crazy score of 54-46. The Auburn defense yielded a touchdown in seven of the eight sets (the four quarters combined with the four overtimes).

While these two teams were scoring touchdowns left and right, teams like Missouri were struggling as the Tigers are now three for 41 on third downs in their last three outings. 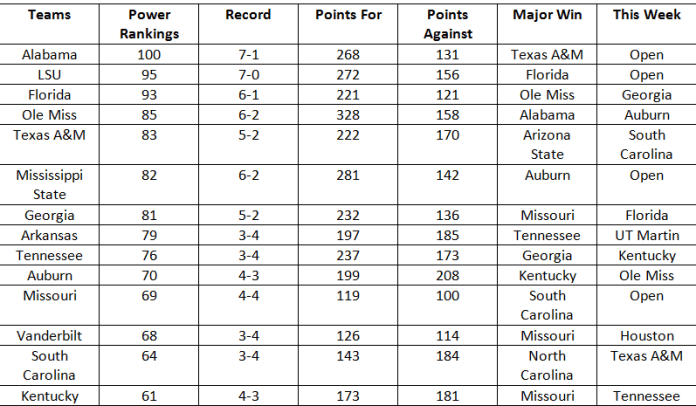 Halloween has arrived and with it a familiar challenge for Ole Miss as the Auburn Tigers are next on the schedule. This game poses some frightening similarities to last season as the Rebels, still in the hunt for the SEC Western title, must conquer the War Eagles on the Plains to keep staying alive.

Let’s hope this year has a different ending and by the way, congratulations are in order for Evan Engram who became the leading receiving tight end in Ole Miss history!