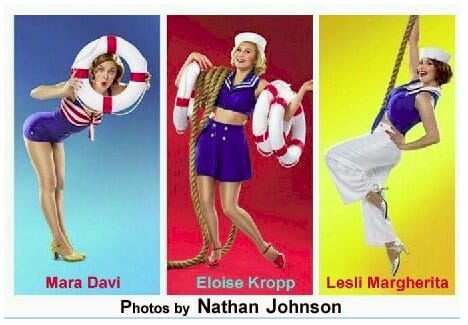 As soon as you enter the auditorium of the Helen Hayes Theatre and see the stunning Art Deco red curtain, you know you’re in for something fun. The curtain rises on a movie screen and the credits roll as if you’re about to see a B&W RKO or Warner Bros. classic, starring the likes of Fred and Ginger and Ruby Keeler and directed by Busby Berkeley.

“I’m one of the biggest fans of movie musicals from the 30s and 40s,” says two-time Tony and Drama Desk nominee for choreography and the show’s director, “ I’ve always wanted to give audiences that feeling of being in a movie house – back to that long ago era when movies became talkies and tap dancing filled the screen.”

Skinner, also an avid fan of the color spectaculars from M-G-M starring Cyd Charisse, Ann Miller, and Marge and Gower Champion, has vivid memories of working in regional theater with one of the major players of early classic musicals: the gal who did everything Fred did but backwards and in heels – Ginger Rogers. “She was amazing, indefatigable; and so generous sharing marvelous memories.”

He says that Dames at Sea “is set musically and hilariously in an era we don’t see any more.” The musical was originally a short sketch, based loosely on 30s musical films. The character of “Ruby” is definitely suggested by Ruby Keeler’s Peggy in 42nd Street. It’s no secret that the writers – composer Jim Wise and book writers/lyricists Robin Miller and George Haimsohn were huge fans of Cole Porter and Irving Berlin. 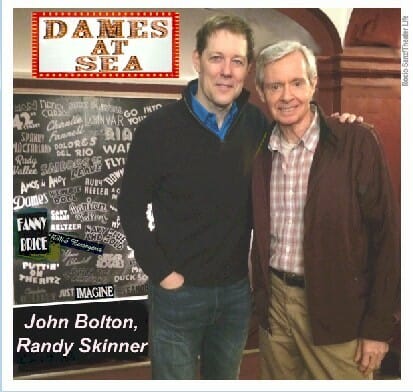 Skinner has had a love affair with the material since not only choreographing but also appearing in a production of Dames at Sea while at Ohio State University. “For years, I wanted to revisit the material and really give it its due.”

Drama Desk nominee John Bolton (A Christmas Story), who has the dual role of a ship’s captain and a director attempting to make a comeback and open a show that’s about to be thrown into chaos, states, “We’re paid to do what we love. I grew up listening to all the original cast albums, and Dames at Sea was one of my favorites. To get to do a show that you love is a dream come true. It has a terrific score, being heard for the first time on Broadway.”

“Randy’s pulled out all the stops,” he continues. “He’s expanded the choreography for the production numbers. When Dames opened Off Broadway in 1969 at the Theatre de Lys [now the Lucille Lortel], the stage was so small that there were only little dance breaks.”

“Dames is a bit unusual,” Skinner points out. “It has principals doing all the dancing. Musicals have gotten away from that. It was a blessing to cast highly proficient dancers who are a triple threat. They can act, sing, and dance. It’s a thrill to watch them light up. They live to dance. They have dancer souls.”

According to Bolton, it was an exhaustive, but fun process. “Those Busby Berkeley epics were famous for having hundreds of dancers, but we’re only six. But six very happy cast members. And we never have to head to the gym. Ours is onstage. For the run of the show, I can eat whatever I want. We’re burning a lot of calories.”

Mara Davi, a veteran of A Chorus Line and The Drowsy Chaperone, has been tapping away since age three “and later fell in love with Fred Astaire and Ginger Rogers, who I desperately wanted to be. I was also in awe of Ann Miller. Eloise Kropp, who later was much inspired by the dizzying dance work of the legendary Eleanor Powell, has been tapping away since age eight. Lesli Margherita, who originated the role of Mrs. Wormwood in Broadway’s Matilda, gets to cross the street and let loose “and dance, dance, dance – and play Mona, an over-the-top diva.” 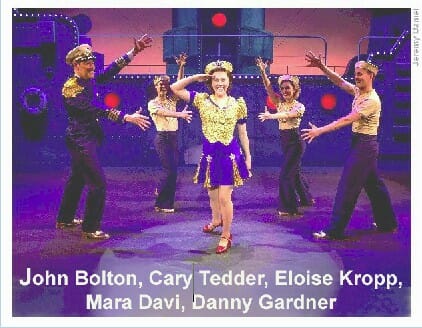 Dames at Sea is the story of a Broadway director and a diva making their comebacks, but just as the show is about to open wrecking balls attack the theatre. So, where else to go but to sea – thanks to the leading lady having had a liaison with a certain Navy captain. Sold out on the rolling sea, the leading lady develops mal de mer. So an ab fab tapper who knows the whole show goes out an ingénue and, more than filling the diva’s big shoes, becomes a star.

The show gets off to a roaring start with the rousing “Wall Street, “quickly followed by one of the most clever tunes written for the stage, “It’s You” – in which Ruby and lovelorn sailor Dick (Kropp, Cary Tedder) take audiences down memory lane with rhymes of Jean Harlow/Gretta Garbo, Leslie Howard/Noel Coward, Burt Wheeler/Ruby Keeler, Aimee Semple/Shirley Temple, the Barrymore trio/ Dolores Del Rio.

The names may only have recognition with audiences of a certain age. Cast members joked that went to the internet and SmartPhones to research the names. It’s very rat-a-tat-tat, but if audience members miss any of the names, they can check the glossary of show business greats on a lobby mural.

“This is the most relaxed and fun experience I’ve had,” says Skinner. “All of us have banded together to make Dames at Sea a spectacular and colorful show with charm and heart. A musical fill with nostalgia that’s refreshing, reflective, and truthful — one that will be embraced by audiences. I’m happy to say it seems we’re succeeding. It’s wonderful to have audiences walking up the aisles with a smile on their faces.”