Ole Miss delivered when it needed to and has now forced a most interesting final run for the SEC Western title. With three conference games remaining (all in Mississippi) in which the Rebs will be favorite in each, the championship is in grasp.

“The Sounds of Silence” were most apparent leaving Auburn Saturday as Tiger fans who were preparing for a title themselves back in August are now bracing for a losing season and a possible 2-6 conference worksheet.

Elsewhere around the league, Tennessee caged the Cats in Lexington with 28 third quarter points; Texas A&M squeaked past South Carolina; and Florida wrapped up the SEC East with a blowout victory over Georgia (the other August favorite). Arkansas crushed UT Martin and Houston brought the Commodores back to reality with a 34-0 runaway victory. 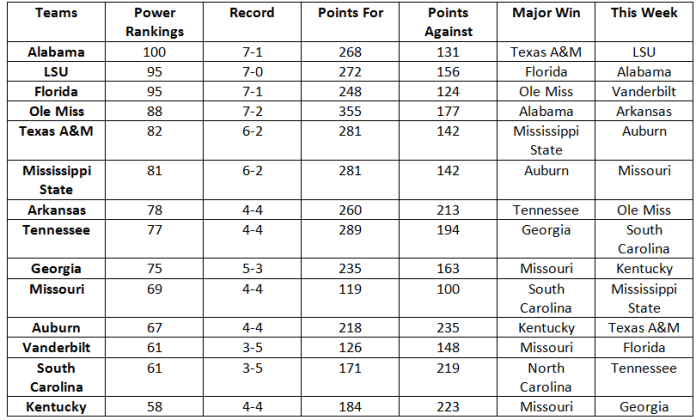 The league’s top four teams (Alabama, LSU, Florida and Ole Miss) have now separated themselves from the other ten as to discussion for major bowls and titles. Note that NONE of these four has lost a conference game to any of the bottom ten! This says volumes. This week the premier games are Arkansas at Ole Miss and LSU at Alabama. The other games are far less important and are more for pride than rankings.

This year’s version of 7-2 Ole Miss has a great deal left to play for down the stretch. The coaches have not only made this team competitive, they have made the team fun and exciting for the fans. Who could ask for more!