When George Hopkins was looking for a place for the Club Team for Ole Miss Lacrosse to practice and host games, he wanted somewhere convenient and flexible.

Playing a club sport in college is a commitment of time and money and George wanted the best for his players to be able to practice. After reviewing the options in the community, the Oxford Lafayette Sportsplex was the obvious choice.

“Everybody out here is just easy to work with,” said Hopkins. “They built us an equipment room for our equipment and let us determine our own practice schedule. It is a great place for the Ole Miss Lacrosse team to host visiting teams from around the Southeast and a great asset to the community. We are now able to host teams in Oxford and bring teams to our home fields. It is a great step in developing a program.” 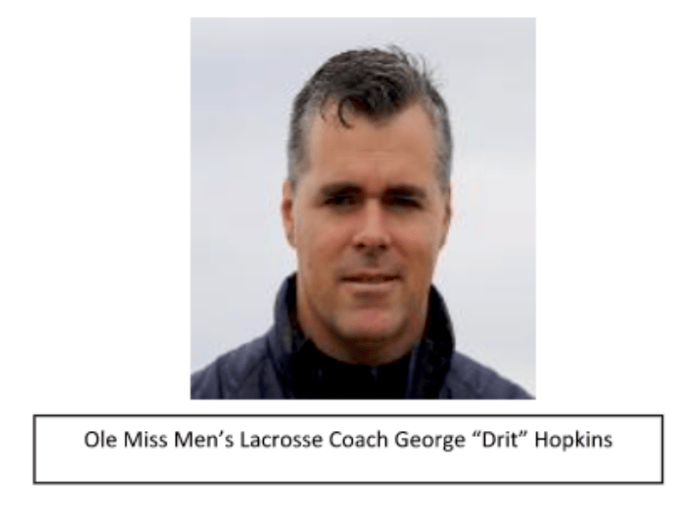 Head Coach George K.D. Hopkins, known as ‘Drit’ among friends, brings a lifetime of experience with the sport of lacrosse to the men’s team at the University of Mississippi.

He first played organized lacrosse for two years as a youngster in Baltimore County with the Cockeysville Springlake Recreation Council. He went on to play high school lacrosse at the Gilman School where he earned the nickname “Magic Pole” for all the interceptions and deflected passes he garnered as a long stick midfielder and defender during man-down situations. He continued to be a defensive specialist as a player at the collegiate level during his years at Franklin & Marshall College, a NCAA D-III program that won the MAC championship during his sophomore year, earning the team an invitation to the NCAA D-III tournament where they lost to Salisbury State in the opening round.

Throughout his professional career as an educator, Mr. Hopkins has been an enthusiastic advocate of the practices and principles espoused by Positive Coaching Alliance and has pursued his passion for lacrosse by coaching high school teams and playing post-collegiate club lacrosse. He was the founding head coach for Harvard-Westlake’s Varsity and JV lacrosse teams in Los Angeles before the sport was recognized by the California Interscholastic Federation. He also served as President of the Greater Los Angeles Chapter of USLacrosse prior to his move overseas and career as a school administrator internationally. The 2015-2016 season marks the second year with Mr. Hopkins serving as Head Coach for the men’s Rebel lacrosse team.