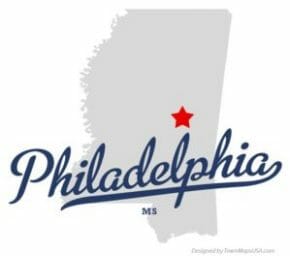 Philadelphia is home to Marty Stuart, a country music legend; Olivia Manning, wife of Archie Manning; C.J. Johnson, defensive lineman for the Ole Miss Rebels. With Geyser Falls Water Park, casinos and the Neshoba County Fair as attractions, there is always something to do in Philadelphia, Mississippi.

Philadelphia is located about 47 minutes North East of Meridian and is 10.6 square miles. The heart of the Choctaw tribe, Philadelphia was given its current name is 1903, but its history goes back hundreds of years.

The Choctaw Indians inhabited the land and established trade relations with the British, French and Spanish settlers that moved near or into their territory in Mississippi and Alabama. In 1831, the Choctaw Indians and the United States reached an agreement in the Dancing Rabbit Creek Treaty, which allowed the Choctaw to become the first group of non-European ethnicity to be U.S. citizens in exchange for land.

Philadelphia is also famous for its great water park, Geyser Falls, which is actually located right beside the town in Choctaw, Mississippi. Geyser Falls offers fun for the entire family with water slides, pools, cabanas and much more.

Pearl River Resort Casino is also located in Philadelphia, with its sister casino, the Silverstar Casino in nearby Choctaw. The two casinos are also have hotels, spas, bars and host concerts on occasion.

Started in 1889, the Neshoba County Fair began as a agricultural fair with church camp meeting roots. Families began to camp on the fair grounds so hotels, and eventually cabins, were built for people to stay in.

The cabins have gotten so popular that there are now neighborhoods of cabins with names such as Happy Hollow, Sunset Strip, Founders Square and Greenleaf Hollow, according to the fair’s website.

The fair hosts beauty contest, horse races, car shows and concerts, to name a few attractions. The fair is also a campaign hub for Mississippi politicians during election years. Governors, state senators, state representatives and other politicians take turns speaking and campaigning for votes at the fair. It is sort of a fair tradition. Ronald Reagan even made a speech at the Neshoba County Fair when he was running for President of the United States.  It is a week long celebration that brings family, friends and fellow Mississippians together.

Though, Philadelphia is a city with national recognition for its attractions and history, it still has that small town feel that Mississippians love so much.

Emily Newton is a staff writer for hottytoddy.com and the editor for Experience Oxford magazine. She can be reached at emily.newton@hottytoddy.com.