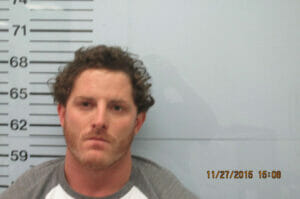 On November 26, Oxford police officers took a report of a domestic assault that had already occurred. The victim stated that her boyfriend, Brenton Craig Morgan (28 of Leland) suffocated her with a pillow and choked her with his hand. The Oxford police arrested Morgan for Domestic Violence – Aggravated Assault. Judge Johnny McLarty set Morgan’s bail at $10,000.

University police responded to the following incidents: a vehicle stop in Kincannon parking lot, a larceny at Lester Hall, a service call for an ambulance at Shoemaker Hall, a vehicle accident on Fraternity Row, a warrant served at Guess Hall, a moving violation per failure to yield right of the way at the Grove Loop, and a traffic detail on the campus.

Oxford Fire Department responded to the following calls:
Three-car wreck at 8:04 a.m. but no extrication was needed at West Jackson Avenue
Smoke detector activation at 11:08 a.m. by cooking at 161 Eagle Pointe Loop
Request to measure CO reading at 11:08 a.m. in the kitchen at the Beta Theta Pi house – the reading was a little high
Smoke detector activation at 4:24 p.m. by a torch at the University golf course
Food burning at 11:14 p.m. reported by a caller saying her microwave was smoking at The Links