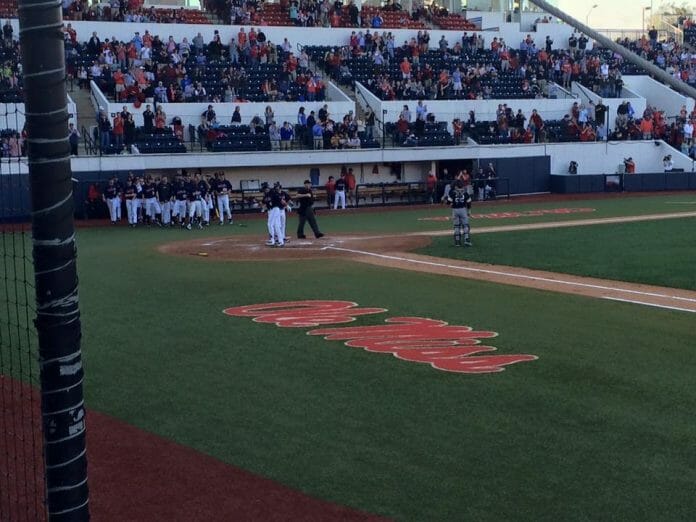 The win clinched the 12th time the Rebels (2-0) have won the season-opening weekend series under head coach Mike Bianco.

“We were able to put some innings together, and string some hits together. We were 8-for-8 these past two games with runners at third and less than two outs,” said Bianco. “As a coach, with 16 runs in your first two games, you have to be proud and it’s hard to complain.”

Two big hits with the bases loaded in two separate innings propelled Ole Miss to victory. The Rebels struck early with three runs in the first before adding four more in the sixth. All seven runs were off FIU starter Christopher Mourelle (0-1), who lasted 5.1 innings.

“We needed somebody who could fill up the strike zone and Andy was that guy. he located his fastball on both sides of the plate and just looked great,” noted Bianco.

Junior left-handed pitcher Wyatt Short (1) stepped onto the mound in the eighth inning for the Rebels, earning his first save of the season in his 2016 debut. Short increased his career saves to a staggering total of 14, putting him in sole possession of the sixth most in Ole Miss Baseball history.

On the offensive side of the ball, sophomore Tate Blackman had his second multi-hit game of the weekend, going 2-for-4 with two RBI and one run scored. Sophomore Will Golsan also helped propel the Rebels to victory with his three-RBI double.

The Rebels wasted no time making an early jump on the Panthers. Errol Robinson led off the first inning with a walk before moving to second on a groundout by Golsan. J.B. Woodman took advantage of the runner is scoring position and singled through the right side, sending Robinson across the dish. Three batters later, Blackman stepped up to the plate with the bases loaded and one out and roped a two RBI-single to left, giving the Rebels a 3-0 lead.

FIU answered in the top of the second with a run scored on a bases-loaded walk. However, Smith fought back on the mound and struck out Irving Lopez to end the threat.

Both bats stayed quiet until FIU squared the game in the fourth. Eddie Silva hit a RBI-single to center field to score Zack Soria, and Nick Day followed with a RBI double to bring the score to an even 3-3. Limiting the damage, Pagnozzi entered the game to pitch and forced a groundout to end the inning.

Neither team scored any runs in the fifth as the score remaining tied at three runs apiece until the bottom of the sixth inning. Blackman got things rolling with a single straight up the middle of the field and then advanced to second on a wild pitch. D.J Miller worked to count for a walk before Kyle Watson drove a RBI single through the left side to score Blackman.

The Rebels were once again in the lead but that was not enough. Cameron Dishon’s sacrifice bunt put two runners in scoring position. FIU took a chance and intentionally walked Robinson to get to Golsan. Looking for his first hit of the season, the sophomore made FIU pay for the decision and roped a bases-clearing double, scoring Robinson, Watson and Miller for a 7-3 Ole Miss lead.

FIU was able to cut the lead by one run in the top of the seventh after scoring on a sacrifice fly.

Short headed to the mound in the top of the eighth inning. With one out, Silva hit a fly ball to right field. Woodman made the catch and sent an incredible throw into home to stop Zach Files from scoring. Short closed things out in the night, once again securing another victory for the Rebels.

The weekend series will conclude Sunday, February 21, as Ole Miss looks for a series sweep. First pitch is scheduled for 12 p.m., and fans can catch the action on SECN+.