It is currently 60 degrees in Oxford, Mississippi, at Manning Way on the Ole Miss campus.

The high for today is 69 with a low of 59 degrees and a 60 percent chance of precipitation. Oxford has received over 3 inches of rain so far and, according to the U.S. National Weather Service, a flash flood watch remains in effect throughout today and Saturday.

Over the weekend, expect to see more rain as heavy rainfall and thunderstorms are expected around the Oxford area.

Weather Channel: As Rains Continue, Dozens of Residents Rescued From Floodwaters in Hammond, Louisiana (and Mississippi) 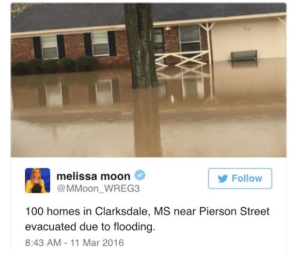 North of Hattiesburg, flood water was reportedly entering homes in the Rawls Springs and Glendale communities Friday morning, according to NWS storm reports. There were also reports of water rescues in Seminary and Petal, according to storm reports in other areas.

Gov. Phil Bryant declared a state of emergency Thursday to assist the areas of the state affected by flooding, which worsened in parts of western and northwestern Mississippi that morning, leaving some roads flooded.

About 100 people have been evacuated in the Delta due to the severe weather, according to the MiHomes in Bolivar, Coahoma, Tunica and Washington counties were flooded and three dams have been breached in DeSoto County, according to a release from the Mississippi Emergency Management Agency. Roads throughout the state were flooded, and some sustained damage due to floodwaters.ssissippi Emergency Management Agency (MEMA) director.

Emily Newton is a staff reporter for hottytoddy.com and the editor of Experience Oxford magazine. She can be reached at emily.newton@hottytoddy.com.