As the University of Mississippi’s Chancellor’s Honors College Artist-in-Residence, Bruce Levingston introduces many influential artists to Mississippi, including our rich culture, our storied past and the artistry that has emerged from both.

In his upcoming April 4 performance at Carnegie Hall, Levingston will feature works inspired by two important Mississippians whose lives embodied the true essence of our state.

Levingston, a native Mississippian and renowned concert pianist, will perform solo premieres of works by composers Nolan Gasser and James Matheson, as well as works by Philip Glass. He is joined by bass-baritone Justin Hopkins for the New York City premiere of “Repast,” an oratorio based on the life of Mississippi civil rights figure Booker Wright with a libretto by National Book Award finalist Kevin Young.

An excerpt from the program shares the inspiration for this meaningful piece.

“The Civil Rights Act of 1964 desegregated places of public accommodation, including restaurants. To mark the larger struggle that preceded passage and to celebrate the fiftieth anniversary of that milestone, the Southern Foodways Alliance at the University of Mississippi, along with Premiere Commission, conceived this original oratorio, set in civil rights movement-era Mississippi. ‘Repast’ tells the tragic, true and emboldening story of Booker Wright, owner of Booker’s Place nightclub and waiter at famed restaurant Lusco’s, who spoke out about the pains of segregation and lived and died in the Mississippi Delta town of Greenwood.

“Interviewed by NBC in 1966, Wright dared to speak the truth about attitudes towards race in that place and time. He ultimately had to leave the job that had drawn him attention, and eventually, just a few years later, lost his life. His vision and spirit live on in this powerful tribute by composer Nolan Gasser and poet Kevin Young, whose searing libretto was inspired by Booker Wright’s own inspiring and unforgettable words.” 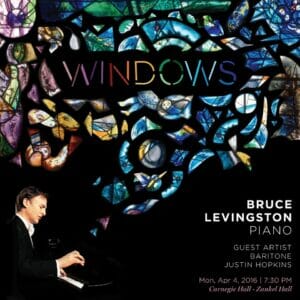 Hardly Levingston’s first performance at Carnegie Hall, this appearance celebrates the 15th anniversary of his foundation, Premiere Commission, which promotes the creation and performance of new music and art in different mediums.

“Although I have performed at Carnegie Hall a number of times, it is always a tremendous honor and exciting experience,” Levingston said. “So many great artists, including Tchaikovsky, Rachmaninoff, Leontyne Price and even the Beatles have performed there that one is always aware of special spirits that fill the place.”

Levingston also will perform “An American Citizen,” a collaboration with “Repast” composer Nolan Gasser paying tribute to Mississippi artist Marie Hull and inspired by her painting of the same name.

Levingston lends these words from his recent book “Bright Fields: The Mastery of Marie Hull” to the program for his upcoming performance.

“During the Great Depression, Hull began an important series of portraits of African-Americans, tenant farmers and sharecroppers. In these works, she treated each subject equally, regardless of race, revealing the human drama, inner struggle and indomitable spirit of each figure. In 1936, she painted a portrait of John Wesley Washington, a local worker born into slavery in 1847. In this heart-rending work, Hull not only gives the portrait the complete name of her subject (almost never bestowed upon African-Americans at that time), but the overall title ‘An American Citizen.’

“This quiet, subtle and extraordinarily significant act of respect and social commentary by a Southern painter from this most ‘Southern’ of states remains, more than ever, a deeply resonant statement about who we are and can be, as a people. It is also a reminder of the powerful voice an artist may bring to his or her society, even in the most closed and difficult of times.”
Levingston said he is proud to bring these works about deserving Mississippians to a broader national audience.

“My hope is that people in and outside of our region learn more about our culture, who we are as artists, as people and as American citizens trying to embrace our own place in history and moving forward to make a positive impact on our society,” he said.