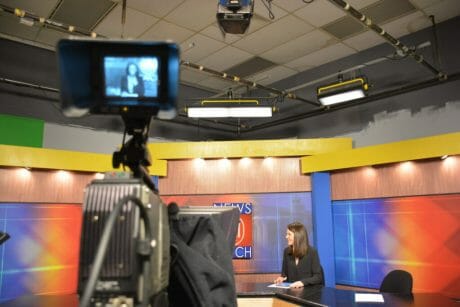 NewsWatch Ole Miss, Lafayette County’s only local broadcast news station which is produced on the University of Mississippi campus, will host a special edition show tonight focusing on the 2016 Associated Student Body Elections on the university’s campus.

The show will feature live interviews with the ASB candidates for president, secretary and treasurer. NewsWatch has asked their two thousand Twitter followers to tweet them questions to ask the candidates on tonight’s show.

News Director Payton Green said, “It’s something we’ve never tried before. The format is completely different and allows for a conversation with the candidates that you don’t see on live TV too often.”

NewsWatch Ole Miss Station Manager Browning Stubbs feels asking Twitter to send in questions for ASB candidates is a great way for the station to gain more of a following.

“We want our audience to join the conversation,” Stubbs said. “We’re going to grow as a news station by doing this.”

If you have a question for the candidates tweet @NewsWatch_UM. NewsWatch will continue taking questions on twitter until 4:30 p.m. tonight. NewsWatch reporters Meredith Parker and Sudu Upadhyay will be interviewing the candidates.

For more information on NewsWatch and candidates or to tune into tonight’s episode visit NewsWatcholemiss.com.

NewsWatch is a live, student-run broadcast that airs from 5 p.m. to 5:30 p.m. Monday through Thursday on Channel 12.

Brittany Clark is a senior broadcast journalism major at The Meek School of Journalism and New Media. For questions or comments, email us at hottytoddynews@gmail.com.