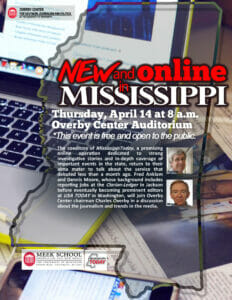 The top two editors of an online news operation that made its debut less than a month ago will talk about the ambitious project designed to provide greater depth to news stories in Mississippi in the spring semester’s finale at the Overby Center for Southern Journalism and Politics this Thursday (April 14) at 8 a.m.

Fred Anklam and Dennis Moore, both Ole Miss journalism graduates who followed similar career paths, will be at the Overby Center Auditorium to join Charles Overby, chairman of the center, in a discussion about MississippiToday. The event is free and open to the public.

After months of preparation, MississippiToday.org was launched last month with a daily online menu of several original stories written by members of a growing staff of reporters that includes other Ole Miss journalism graduates such as Patsy Brumfield, a veteran journalist who has covered many of the most important events in the state’s modern history, and Adam Ganucheau, a more recent addition to the news scene in the state who served on the staff of The Clarion­-Ledger.

The idea for an online news service for Mississippi was conceived and developed by Andrew Lack, the president of NBC News who has many friends and family connections in the state. Though a New Yorker, Lack’s ancestors were prominent citizens in Greenville in the 19th century when the Delta town was first settled and he is a frequent visitor to the state. Lack and others interested in establishing a free online source for news about the state have raised funds from private donors to sustain the service, which is based in Jackson.

Anklam was part of a Clarion­Ledger news team headed by Overby that won a Pulitzer Prize for public service in 1983 for their extensive coverage of the effort to win passage of the Education Reform Act. He later was a reporter for Gannett News Service in Washington before becoming an editor at USA TODAY. In 2015, Anklam was awarded the Silver Em, the University of Mississippi’s highest honor for journalistic performance in the state or by Mississippi journalists working outside the state.

Following his reporting and editing job at the Clarion­Ledger, Moore became editor in chief of “Florida,” an award­winning magazine published in Orlando. At USA TODAY he was managing editor of the newspaper’s Life section before directing national news coverage for the organization’s online department, usatoday.com.

For comments or questions, email us at hottytoddynews@gmail.com.