Music in the Hall, Bocce and Baseball: a Festive Night on May 19 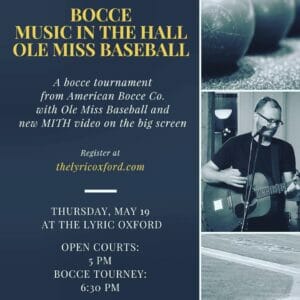 This Thursday at the Lyric, the Music in the Hall, a pocket concert series, will return bigger and better with a twelve-team bocce tournament and a broadcast of the Ole Miss baseball game at Texas A&M.

The schedule for this festive evening begins with new and recently released video from Music in the Hall from 5:00 p.m. to 6:30 p.m. The new releases will feature songs by Brooke Waggoner, Tyler Keith and the Apostles, Alex Culbreth, Reels, Andrew Bryant, Matt Arbogast, Jimbo Mathus, Leo “Bud” Welch, Jim Mize with Laurie Stirratt, Black Water Trio and the Music in the Hall House Band. The broadcast of Ole Miss Rebels vs. Texas Aggies will begin at 6:30 p.m. The Music in the Hall content will continue after the game and in between the game breaks.

In the meanwhile, the bocce competitors can enjoy open courts from 5:00 p.m. to 6:30 p.m. with the tournament beginning at 6:30 p.m. Around 8:00 p.m., the tournament won’t be utilizing all three courts so the open court play can begin again for for free. The teammates of the winning bocce team will each receive a six-pack from Yalobusha Brewing Company and a ticket to any show in the future at The Lyric.

This three-in-one entertainment feature is brought to Oxford by the Music in the Hall co-founder and producer, Daniel Morrow, the Digital Media Producer for JAMA who moved to Chicago from Oxford three years ago.

He said in an email: “It involves three things I love (music, bocce, and Ole Miss Baseball), so like every event I produce, it starts with trying to create an experience that I would enjoy and want to attend and hoping others feel the same way and want to join. We have so much great new content from our last three MITH shows, and the Lyric is a great place for viewing. I’ve been thinking for a while that The Lyric would also be ideal for what this crew has been doing in Chicago, so the timing feels right to help get that rolling. I was lucky enough to discover Wicker Park Bocce Club (now American Bocce Co.) a month prior to its launch in Summer 2014, so I’ve gotten to experience their growth from a “super-fans'” perspective. I had only been in Chicago for a year at that time, so it has been such a big help meeting new friends which can be a difficult thing as an adult. It has really become a family atmosphere here.”

Morrow will be accompanied by American Bocce Company’s founders, Ben Tudor and Matt David. He said, “It will be the first visit to Mississippi for both! The three of us will referee the games, give some instruction, and be general good-spirited ambassadors of bocce. They’ve both become great friends through the league, and Ben is actually the newest addition to the MITH team, helping out with some video editing.”

Ben Tudor, one of the founders of American Bocce Company, is excited to be in Oxford to introduce serious bocce competition to Oxonians.

He said in an email, “Bocce has not yet ‘started’ in Oxford, though I plan on changing that! I’m sure that people play casual bocce in their back yards or parks in Oxford as in the rest of the world, however I, nor Daniel, are aware of any organized bocce leagues or events going on their now. As we have mastered the art of throwing bocce events in Chicago, we are now scaling our model with a national network of leagues and hope to setup in Oxford soon. We currently have American Bocce Co. leagues in Chicago, Boston, Knoxville and New York with league development occurring in Milwaukee, New Orleans, Michigan and Ottawa, Canada.”

In describing bocce to someone who has never played it, Tudor explained that the bocce “is a game you can learn in minutes but takes a lifetime to master.”

To win points in bocce, the player needs toss the red or green ball a little closer to the small ball called pallino than the other players on the opposing teams.

Tudor said, “I have used horseshoes, curling, shuffleboard, and cornhole as games that bear similarities to bocce. It is also a game that can be played by people of all ages, genders and athletic abilities. Our leagues are full of young and vibrant individuals and with pride I say, just about 50/50 male to female. That said, we also work and volunteer with retirement communities and have a great relationship with the Special Olympics volunteering as refs and donating money to them from tournaments that we run. It is truly a game that can be enjoyed by all.”

When one looks at Ben Tudor’s life, his involvement in bocce isn’t surprising.

“Growing up in upstate New York, my family would always pull out a bocce set at our get-togethers,” Tudor said. “I can still see my grandmother with a Manhattan in one hand and a bocce ball in the other, tossing in my parents front lawn.”

His business, American Bocce Company, began as Wicker Park Bocce Club after the neighborhood in Chicago that he lives in. The inspiration struck when Tudor and his friends had an idea to clean up “an ugly and forgotten city lot” near one of the co-founder’s apartment at the time.

He said, “We wanted to do something more active and exciting than a community garden – No offense to gardeners! But with a younger, hip demographic in the neighborhood we needed something different – and after a camping trip on the shore of Lake Michigan where we played bocce for three straight days, we decided a bocce park was the thing to do.”

After a fundraiser, they built two 60’x10′ sand courts and then added mulch, a picnic table, patio furniture and a grill. When they were ready to simply enjoy the leisure, bocce shot up in popularity within Chicago as more people were competing at the newly-renovated courts most of each and every summer day.

Tudor said, “Once we realized that people were into it, we started running leagues and with the integration or our portable courts which allow us to move from place to place, indoors or out, that is what we continue to build on today. At that point we outgrew Wicker Park Bocce Club and rebranded to American Bocce Company.”

And now Tudor with Matt Davis, one of American Bocce Company co-founders, will bring the infectious fun to Oxford with the help from Daniel Morrow and the Music in the Hall series.

The Music in the Hall series began eight years ago when Daniel Morrow and Steve McDavid used the common area in the oldest building located at 1109 Van Buren Avenue on the Square to host a pocket concert of live music. Since then, the small concerts were filmed and aired on DVD and online. The Music in the Hall branched out to Bottletree Bakery and people’s homes and eventually to Chicago when Morrow moved. Morrow said the deciding factor for him to move to Chicago was that he could “easily get back to Oxford every two to three months for Music in the Hall.”

Jim Mize and Laurie Strriatt performed at The Mill at Plein Air as part of the Music in the Hall series.

“The primary goal of the series has always been to provide a way for bands to get high quality video recordings produced at no cost,” Morrow said. “The next goal is to provide a special early-evening listening experience for music fans. One metric I’ve used to measure our growth is Youtube views. We get close to 500 views per day there. That has been the case since the second or third year of the series, so I guess you could say we’ve had a plateau going for about four years. One interesting note on that is that when we took and break for over a year, the Youtube traffic actually grew.”

When asked about the impact the Music in the Hall series had on the Oxford art scene, Morrow said that from personal accounts a few artists were able to progress their careers.

“Early on, that was one of the things that reinforced my belief that I was doing something worthwhile, when an artist told me his band had booked an entire tour using the video from our show,” Morrow said.

In the meanwhile, the musicians and those who love the craft can visit this website: http://www.musicinthehall.com. Those interested in the three-in-one entertainment at The Lyric on May 19 can check on the event via Facebook.