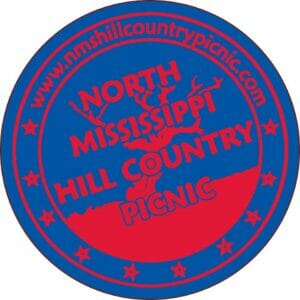 The Eleventh Annual North Mississippi Hill Country Picnic is in full swing, having started today at noon with a performance by The Hill Country Funk on the Camp Ground Stage.

Woodstomp took the Camp Ground Stage at 1:00 p.m., bringing their unique brand of the Hill Country Blues with them. Their sound is reminiscent of The Black Keys—heavily influenced by the unmistakable sound of the distorted guitar riffs that R.L. Burnside and Junior Kimbrough made famous. At 2:00 p.m., Kenny Brown and Friends took the stage. With Kenny being co-creator of the festival, and his close relationship to the inventors of the North Mississippi Hill Country sound, the crowd no doubt thoroughly enjoyed the chance to see up-close and personal a performance by one of the last living legends who learned his craft from R.L. and Junior themselves—both of whom Kenny had a family-like relationship with that began when Kenny was a young man, barely out of his teen years. Out of all the performers listed on the roster for this festival, Kenny’s familial bond he shared with R.L. and Junior is probably rivaled only by Robert and David Kimbrough (two of Junior’s sons) and Duwayne and Garry Burnside (two of R.L.’s sons), all of whom also appear on the roster for this event.

At 3:00 p.m., Bill Steber and Libby Rae Watson took the Camp Ground stage to wrap up the “warm up” session, and get the crowd ready for the attractions at the Main Stage. Bill Steber is a photographer by trade, and also a musician. He is best known for documenting over the last twenty years the blues culture in Mississippi through his fantastic photography. Bill has taken every opportunity possible throughout his career to chronicle authentic scenes that portray authentic portraits of that thing called, “Mississippi,” including, “…blues musicians, juke joints, churches, river baptisms, hoodoo practitioners, traditional farming methods, folk traditions and other significant traditions that gave birth to or influenced the blues.” His exhibit “Stones in my Pathway” (a nod to the Robert Johnson song “Stones in my Passway”) is truly a work of Southern artistic genius, with much praise from critics of the arts as well as being well received by the public. Libby Rae is “…an authentic Blues woman who has been playing Blues since the early 1970’s.” Libby Rae was instrumental in organizing the talent for the very first Delta Blues Festival ever, held in Greenville, MS in 1978.

Rocket 88 took the Main Stage at 5:00 p.m. to add their own unique brand of country, rock, folk and blues fusion to the great talent performing at this years’ Picnic. The band is a local favorite and has been a continuous presence in the Oxford music scene since 2005 (and well before that in a different band, Honey Blonde, from which several members of Rocket 88 hail). Rocket 88 has a wide range of musical influences. Rosamond Posey (lead vocals and acoustic guitar), shares the leading role of the band alongside her husband Jamie Posey (vocals, lead guitar, harmonica). Rocket 88 pulls cover songs from their repertoire and performs them in ways that often rival the source from which the songs came.

Jamie and Rosamond (or “Rosie,” as she is affectionately referred to by those who know her well) have both been a constant and powerful presence on the Oxford music scene, as is evidenced in the photograph above. Duff Dorrough, seen in the photograph with Jamie, sadly passed away a few years ago, but his name has become legend in the history of Mississippi music as the lead man for the extremely popular band from the ‘80s, The Tangents. Jimbo Mathus (also pictured with Jamie) is almost as important as Duff in the halls of Mississippi music history. (See the description below of Jimbo Mathus to find proof of this bold statement). Rosie has a voice that makes you understand the origin of her original bands’ name “Honey Blonde.” Rosie has honey blonde hair, but when she sings, it is clear that it was not just her hair that inspired the name of her previous band. It is her voice—a voice just as rich, sweet, thick and beautiful as her long and gorgeous honey blonde hair—that sounds as if it were drenched in Tupelo honey to produce the powerful yet lovely Southern inflection that is the signature of her unique and beautiful voice. She does Lucinda Williams almost as well as Lucinda does herself. Rosie’s deep, full-bodied voice is one of several reasons she can rock a Lucinda song so well, Lucinda might even get a little envious, if she were the type (which she is not…Lucinda Williams is one of our nation’s most valuable national treasures—a musical genius with so many award and accolades, they are too numerous to name here).

Robert Kimbrough, one of Junior Kimbrough’s sons, takes the stage at 7:00 p.m. The link that is attached to Robert’s name above will lead you to a video of a wonderful interview from 2012, in which he explains so eloquently the legacy that he and his brothers carry on in honor of their father. He also gives a touching account of how the picture of his father that hangs on the wall behind him (the interview was conducted at Robert’s home) keeps him reminded of what he feels is his duty to carry on in honor of his late, great father.

In this video, Robert is playing the song “All Night Long,” one his father’s most famous songs, covered by just about every musical act that attempts to emulate the sound of the Mississippi blues. The visual quality of the video may not be that great, but the audio sound is all you need to hear to understand how well Robert honors his father’s name and the distinctive sound of the North Mississippi Hill Country blues that Junior, R.L. Burnside, and others made famous during their lifetimes.

The infamous Oxford band the Kudzu Kings will be taking the Main Stage at 8:00 p.m. This band has been a favorite of the Oxford Music Scene since the mid-‘90’s. The best description I can give you is to provide this wonderful article written by the great Oxford writer Tom Speed, published in Legends magazine, celebrating the twentieth anniversary of the band’s inception.

Jimbo Mathus has also been an integral part of the Oxford music scene for years. He is arguably one of the most important music figures within the contemporary Oxford music scene—dedicated to preserving and promoting Mississippi and the blues, country and folk sound this state has gifted to the world. Jimbo is seemingly tireless in his dedication to this work…touring almost non-stop locally, nationally and internationally.

Outside of the South, he is more widely known for lending his vocal and guitar talent to the band The Squirrel Nut Zippers. Their song “Hell,” a track from their 1996 album Hot, has become one of the most identifiable and popular songs to join the hallowed halls of the cannon of great American music. Jimbo’s discography is an astoundingly prolific one—an amazing collection of albums that is so large, diverse and full of musical genius, it proves him to be one of the most important musicians not only to the South, but of modern American music as a whole. For Oxfordians, he is better known as the lead man for his band the Tri-State Coalition. To give you an idea of the prolific, authentically Southern and creative nature of Jimbo Mathus, here is a list of his recent album releases: Knockdown South (2005), Old School Hot Wings (2006), Confederate Buddha (2011), White Buffalo (2013), Dark Night of the Soul (2014), Band of Storms (2016). The song “Tallahatchie,” from the album Dark Night Of The Soul is one I just can’t help but promote—not only because it is a great song, but also because I grew up right on the banks of the Tallahatchie River in Tallahatchie County. This song is a perfect example of Jimbo’s highly-skilled craft. His own unique blend of blues, country, rock and soul come together to produce what is being dubbed “fusion music”—the quality of which rivals that of any other artist out there attempting to achieve this difficult and therefore amazing feat. There are very few artists out there achieving the Southern authenticity and effortless style of Jimbo’s trademark sound.

The David Kimbrough Band takes the Main Stage at 10:00 p.m. David, along with his brother Robert, bring a truly authentic North Mississippi Hill Country sound to the Picnic because they “got it honest,” as we Southerners would say. Their father, Junior, is possibly one of the most famous and influential blues men ever to have lived. Please read yesterday’s installment of this series covering the Picnic and its origins to learn more about Junior Kimbrough and the amazing contribution he and his friend and colleague R.L. Burnside have given to the world of music.

The Duwayne Burnside Band takes the Main Stage by storm at 11:00 p.m. For you lucky blues-loving festival-goers attending the show tonight, get ready for a serious journey into the most authentic representation of the North Mississippi Hill Country blues that can be found anywhere on earth,‘cause you can bet that R.L. is “…In Heaven Sitting Down” (and smiling down on the Picnic from above, no doubt). Out of all of R.L. Burnside’s children and grandchildren who carry on the tradition of the North Mississippi Hill Country blues, Duwayne is more like his father R.L. in both style and appearance than any of the other sons and grandsons following in their father/grandfather’s footsteps. To learn more about Duwayne and his contribution to North Mississippi Hill Country blues history, please read yesterday’s installment of this series. Both Duwayne and Garry Burnside are discussed in detail in the article. In it there is found many reasons for the justification of each of these living blues legends’ right to bear and carry on the name of their beloved father, R.L. Burnside.